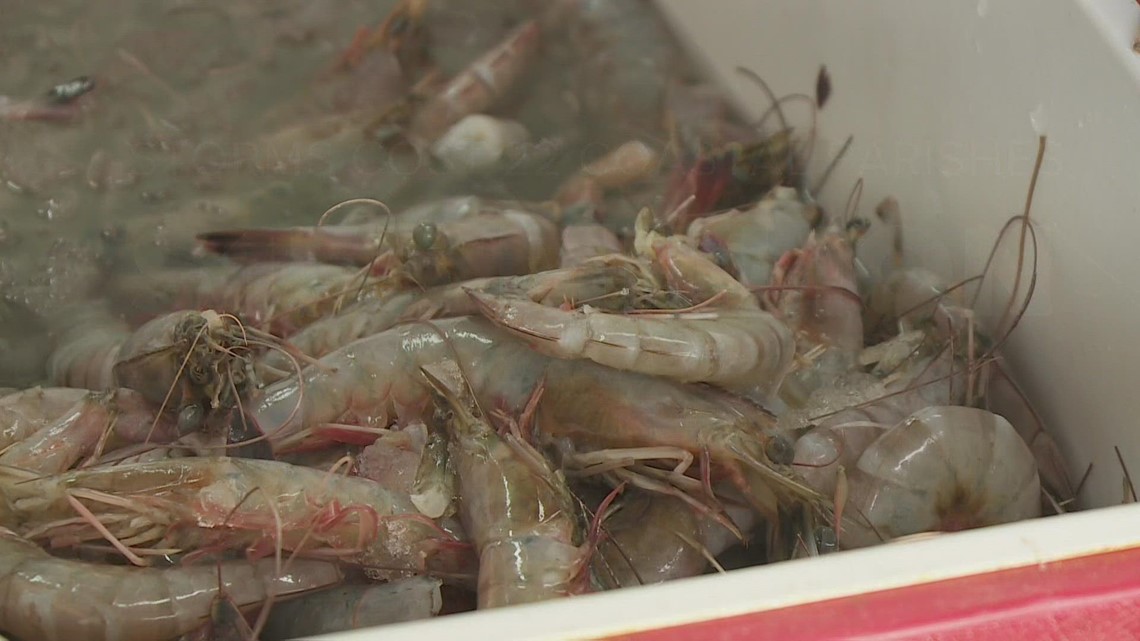 About $305 million of that number came from damage to infrastructure like ships, caused mostly by wind.

JEFFERSON PARISH, Louisiana — Powerful hurricanes like Laura, Delta, Zeta and Ida have not only disrupted life in Louisiana; they have been devastating for fishermen who depend on the gulf for a living.

A new report from the LSU Ag Center and Louisiana Fish and Wildlife shows storms from August 2020 through August 2021 cost the commercial fishing industry an estimated $579.9 million.

About $305 million of that number came from damage to infrastructure like ships, caused mostly by wind.

It is partly responsible for the rising cost of fresh seafood in the South. Westwego Shrimp Lot vendors notice this, as do customers.

“Prices have gone up a lot since last year,” said Mikayla Hebert, who works at Amy’s Seafood.

On the other side of the court, Derona “Dee” Melerine sees it too.

While stocked with shrimp, she says the economy as a whole has set the industry back. Across the shrimp lot, shrimp range from about five dollars to six dollars a pound, depending on size.

“His [some items] just harder to get. And people just can’t afford it. They don’t have the means to do it. The gas and everything outweighs what they catch from the merchandise,” Melerine said.

“Hopefully the price doesn’t jump another quarter or two. I don’t think they will. But when you can’t get something, the almighty dollar plays a role.

But the weather also played a huge role. The study published by Wildlife and Fisheries includes 19 pages of survey responses from fishermen and people working in the industry. They brought to light some of the disastrous and devastating circumstances. Many lost their homes and businesses after Ida.

“I can’t get any income from harvesting oysters. I have been an oyster fisherman for over 25 years and this is the worst I have ever seen,” the survey wrote.

Another writes: “I was recovering from Zeta repairing damage to the boat and structure and Ida arrives. I finished……”

A third said, “I lost about 230 crab traps to Hurricane Ida in Lake Pontchartrain… At about $45 each for these traps, I will have a loss of $10,300 in equipment and I don’t couldn’t fish for about 5-6 weeks.

There are countless examples of fishermen who have reported that they were unable to get crab traps out of the water in time and lost most or all of their expensive traps.

This explains why some vendors, like Amy’s Seafood, have trouble getting crabs in stock.

“Right after the storm, a lot of them said they found a lot of trash. They were trying to move all the trash out of their traps. A lot of them couldn’t even find their crab pots, so it was a lot” , said Hebert.

In total, Laura, Delta, Zeta and Ida cost the state’s 22 coastal parishes about $155.3 million in revenue.

Months later, it spills over to what Louisiana puts on the dinner table.

The report did not include studies on the impact of storms on farmed animals like crayfish.

RELATED: Crab meat prices are making some of your favorite dishes expensive