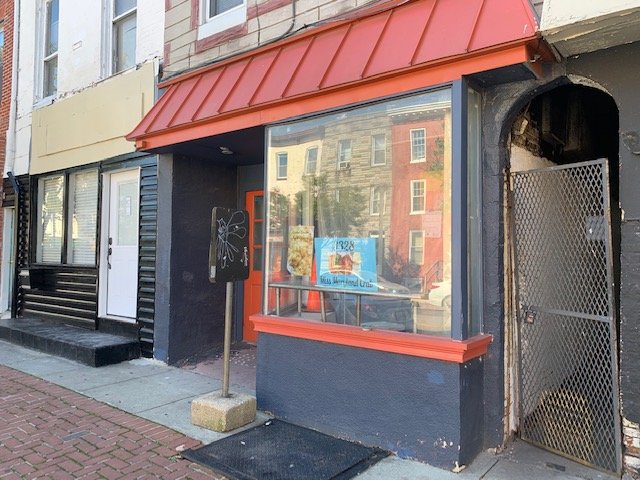 Chef Veronica El brings her Miss Maryland Crab seafood and barbecue concept to 813 Washington Blvd. in Pigtown. The first-floor retail space on Pigtown Main Street was previously the home of Nick’s Rotisserie before moving to a larger space three doors down.

El has been a chef at several restaurants in Baltimore. She said she took the name Miss Maryland Crab when she worked at the GAY Lounge in Mount Vernon where she sold hundreds of her crab cakes every day.

When the COVID-19 pandemic hit, El threw Miss Maryland Crab into a commercial kitchen in North Baltimore. She would prepare food orders and then ship them out using delivery apps like Uber Eats, GrubHub, and DoorDash. The menu included crab cakes, as well as other seafood dishes and sides.

â€œWe sold every day,â€ El said. â€œWe were so successful during the pandemic that I saved enough to get this building and a bunch of equipment. “

El signed a lease at Pigtown in April and is working on opening the space. She said she was ready to open her doors, but was waiting for an electrical problem with the building to be resolved. She hopes to open as soon as possible.

El said some of his most popular dishes are crab cakes, shrimp po ‘boy and smoked gouda mac and cheese. Many dishes on its menu include crab, salmon, shrimp and chicken. Miss Maryland Crab will also sell seafood boils.

El loves his new location in Pigtown. â€œI love being on a main street and I love that the community is so involved,â€ she said. â€œThe whole community has been so welcoming. “

She noted that Pigtown needed more food options for dinner and breakfast.

About the Author: Kevin Lynch

Founder and Publisher of SouthBmore.com, longtime South Baltimore resident and graduate of Towson University. Unconditional fan of Ravens and O, father of three, amateur pizzaiolo, skateboarder and “bar food” gourmet. Write to me at [emailÂ protected] and follow me on Twitter at @SoBoKevin.