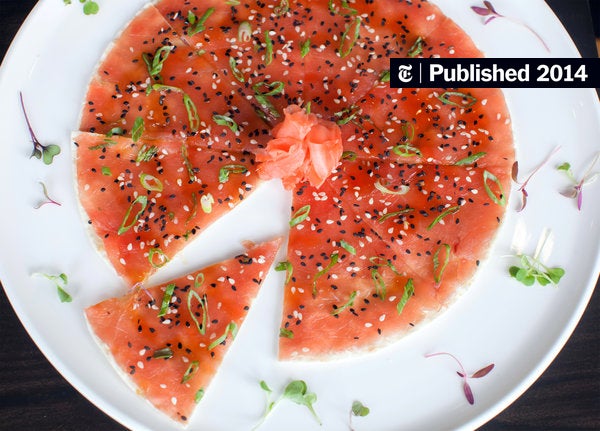 A review of FISH Restaurant & Bar in Stamford

People used to complain that there weren’t any good seafood restaurants in Fairfield County. Not only has that changed, but with the arrival three months ago of FISH Restaurant & Bar in Stamford town center (where the Boca restaurant was located) there is also a great place specializing in sparkling fresh fish and shellfish.

FISH serves a few other things besides fish, but when you can start a meal with a paper-thin tuna carpaccio that’s so dazzlingly fresh (stale on lean flatbread, with wasabi, chopped green onions and a Pickled ginger rose); or Spanish octopus (tender grilled tentacles, enhanced with green beans, potatoes and olives); or a giant crab cake (bursting with fresh meat), how can you go wrong?

The dinner menu is relatively simple, with two main categories of starters: naked fish (a selection of six fish, seared, grilled or blackened), with a choice of six sauces; and modern comfort dinners (eight choices). Five sides are also available.

At a recent dinner, our trio enjoyed entrees such as grilled yellowfin tuna, pan-seared Georges Bank scallops (from Massachusetts) and grilled Scottish salmon. In each case, the presentations complemented the simple wonder of seafood itself. My tuna came in rare and wonderfully buttery slices resting on a bed of mashed potatoes. The mahogany-browned scallops were served with a melt-in-your-mouth flavor, on a couch of sautÃ©ed spinach with garlic. The grilled salmon, perfectly undercooked as requested, was accompanied by spinach.

On a second visit, friends and I varied our orders, starting with a chunky spinach and crabmeat dip, which we spread on triangles of crispy garlic toast.

We progressed to appetizers like Prince Edward Island red curry mussels (fatty, juicy, and rich in flavor), in a lightly spiced coconut milk broth teased with lime (but without the lemongrass mentioned on the menu); and an avocado and shrimp salad (generous and smoked), brushed with a lemon-lime endive vinaigrette.

A portobello risotto cake (fried but light and airy, padded with chunks of mushrooms) was topped with shreds of Brussels sprouts in a white truffle vinaigrette.

The starter that we were most excited about was the whole roasted flounder, a sizable specimen, with its skin and flesh white and sweet. I had ordered a BÃ©arnaise Royale sauce on the side, which was thick and parched around the edges, but the fish was so radiant that no sauce was needed. His only companion was a side of whipped, chewy mashed potatoes.

Oddly enough, at the same meal, the mashed potatoes that accompanied the blackened chicken and sautÃ©ed spinach were pale gray in color and tasted tired. The thin slices of chicken in the dish were moist and well rubbed, not overdone, with cumin, pepper and other spices, helped by a mango and red pepper salsa confetti. Our seared halibut was a treat too, with spinach and a generous side of piping hot crispy fries.

Desserts are few, but the lime pie, despite the boxed whipped cream, had an edgy flavor, and the coco misu was a sweet and frothy coconut dish.

My main complaint at FISH – aside from receiving our entrees to a meal while we were still eating our appetizers – was the high decibel level, which was the result of some particularly rambunctious chatterboxes in the dining room. But what else is new about dining out almost anywhere?

Don’t bother to thaw the fish, instead do it frozen