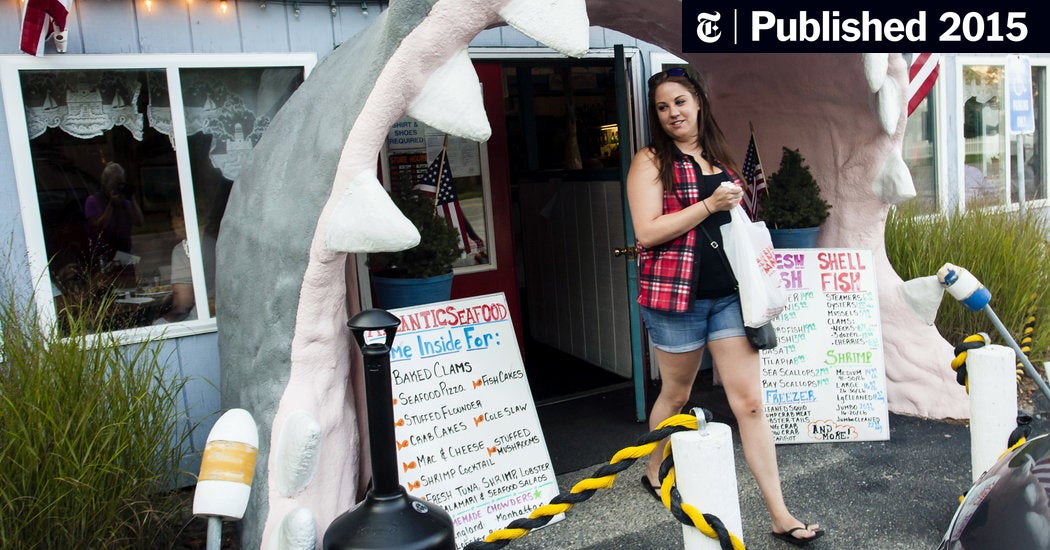 Heading east to Long Island, just before the Hamptons patina of wealth begins to emerge, the Montauk Highway passes quaint hamlets and faded farms and the water fingers of Moriches Bay. Along the road in Center Moriches, through the mouth of a gaping shark, Atlantic seafood restaurant and fish market offers a premium of the sea – to eat in, take out or prepare at home – but the main attraction is the warm ambiance of the place, orchestrated by the owner of the establishment, Dennis Donovan, a local since 50 years.

Mr. Donovan is one of 10 children who moved to the Moriches Center in the Bronx when he was 6 years old. As a teenager, he worked in a bakery. After high school, he and a brother-in-law owned and operated their own local bakeries before Mr. Donovan opened a successful pub. He also met Chrissy Flynn, daughter of Maryann Schultz, who co-owned a seafood restaurant on the Montauk Freeway in a former exchange store where her husband, George, built lobster pots at retirement and where, one day, Maryann steamed. a lobster for a local man as a favor. This favor spawned a restaurant and seafood market in 1979 which would be sold in 2005 to the man married to Mrs. Flynn, Mr. Donovan.

“Look, our lobsters are cooked like everyone else,” Donovan said over a recent weekend. So it’s clear that this is the place that inspires the fierce devotion of locals and those heading to more toned shores. â€œWe try to do things a little differently.

Even on a Saturday night in the height of summer, the restaurant and its adjacent take-out and fish counter buzz with harmony and predominant goodwill. Waitresses clad in blue come and go from behind the counter like charming, perfectly timed acrobats to the tables that flank the main entrance. At the fish market and stewardship in the back, Chrissy Donovan and her daughter, Colleen, oversee take-out orders, the purchase of fresh and frozen fish and associated groceries, amicably chatting with customers all over the place. by constantly staying in motion.

The food prepared comes from the silent kitchen in the back, run by Mr. and Mrs. Donovan’s sons, Denny and Benjamin Bravo, a 25-year veteran of Atlantic Seafood. Senior Dennis is everywhere, still bursting with energy after a day that started at 4 a.m. buying fresh fish from the docks and inlets of the South Shore, like every other day of the summer season. -stop. He shakes hands, slaps the back, asks for updates from family, helps with orders, calls tabs, clears tables and kneels for conversations with seated customers, looking them straight in the eye.

Recently seated for dinner at a table under a netting stretched ceiling among walls adorned with maritime bric-a-brac were Mike and Marissa Morris, both 39, with their 5-year-old daughter and new baby sister. -born.

â€œWe come fairly regularly,â€ said Morris, â€œand no one is going to look at us like we have three heads if our child cries a little. It’s very relaxed. It’s the family.

â€œPeople who grew up here stay here,â€ Morris added. â€œWe know the waitresses. We know everyone.

And that’s what makes the lobster Mr. Morris eats different from what is easily found elsewhere: It’s bought, prepared, and served in an environment fostered by the philosophy of a local Moriches boy (via the Bronx ) made good. And we go through the mouth of a shark to eat there.