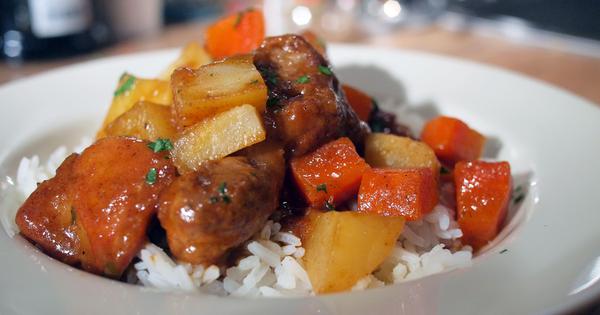 Novel by Keith St Clair Butler The Secret Vindaloo serves this as a starter: “Tell me what you eat, I’ll tell you who you are.

The line was written centuries ago and is attributed to lawyer and politician Jean Anthelme Brillat-Savarin. I’m sure the French foodie had no idea who an Anglo-Indian was, let alone what their palates preferred. In any case, their fusion-kitchen was, like the community itself, still a work in progress. Incredibly, it still is!

But if I told Brillat-Savarin that my lunches are even more Indian and my dinners more British, and that I eat a bland stew or a pish-pash with as much relish as a spicy pork vindaloo or a Malay prawn curry , he would tell me certainly told me that I belong to a people-fusion. Now if I tell you I’m feasting on a medium-rare steak (beef of course!) using a steak knife and fork, after enjoying a tasty lunch of fish curry with my fingers, both with equal dexterity, you will tell me that I am an Anglo-Indian or look like one at table.

It’s true, you are what you eat. We certainly are! So if your palate is changing, you probably are, as a person. And if your staple diet straddles two continents like a culinary colossus, chances are your ancestry or upbringing will too.

Butler used Anglo-Indian cuisine as a telling metaphor for his community and concocted a delicious khichdi of food and turn of phrase, swimming in a mixed-blood sauce. So how best to describe this fusion cuisine that has evolved over the centuries, just like the community? Community researcher Richard O’Connor says, “Anglo-Indian cuisine is neither too spicy nor too bland; neither too Indian nor too continental; but a delicious mix of both.

Gordon Maher, one of the most prominent community leaders in the diaspora, agrees with him in Paul Harris’ delicious short Anglo-Indian Cuisine: “Because it was a hybrid community, it adopted lots of British and Portuguese standards. But it was actually tinged with the Indian flavor; so many of our foods were hybrid fusion foods. However, as good Anglo-Indians often agree to disagree, Blair Williams, a Calcutta-New Jersey crossover, has a different take on the balance: “Anglo-Indians ate, cooked, loved Indian food. They did not cook, eat or like English food. Food-wise, we were very Indian.

A person who has never cooked – an Anglo, Indian or Anglo-Indian dish in his life is not the best authority on this matter of vital importance to the community, Anglo-Indologists and others who are just curious to know what really goes into the making of an Anglo-Indian. Since I have never churned dekchi and have no intention of tarnishing my very Indian reputation by staying away when the professional domestic helper puts it down in the kitchen, I have no right to make a judgment about it. But as I am a pay-too ​​(an affectionate term for a foodie in many Anglo-Indian households, obviously derived from payt, Hindi for ‘stomach’) and like many of my fellow human beings, I live to eat, I have the audacity to air my views. I would say that a large majority of Anglo-Indian dishes are a little of this, a little of that, and a lot of themselves. Let the language of pay-too ​​speak.

Let’s put it this way: it’s like watching an hour-long fusion concert – ten minutes of the Beatles, followed by a raga-solo by Pandit Ravi Shankar, topped by forty-five minutes of the sitar maestro playing with the big band , his sitar conversing with George Harrison’s lead, while Ringo Starr enjoys struggling to keep up with the frenetic rhythm imposed by Ustad Zakir Hussain’s tabla.

Much of Anglo-Indian cuisine is not made up of two distinct portions of continental and Indian cuisine, where east is east and west is west. The twain met and continues to meet effortlessly and seamlessly every day in most Anglo-Indian kitchens.

The two may not have come together so completely when the Indian-born English poet Rudyard Kipling was romanticizing the subcontinent, but the process had indeed begun a few centuries earlier, and over the course of the last century or so it evolved as a self-contained kitchen. Different, unique, dynamic – it is different from its sources, unique in flavor and characterized by constant change. So, let’s start from when it all began.

The birth of the Anglo-Indian community is inextricably linked to the spice trade. When Vasco da Gama returned home from his three-month stay in Calicut in 1498, his ships were laden with pepper. Soon Europeans were heading to Lisbon and not Venice to trade in spices, and before they could say “great
dollars”, the Portuguese were back in India. Just seven years after Vasco da Gama’s home run, Lopo Soares hit a real home run. Its nine ships left the Malabar coast carrying incredible quantities of pepper, ginger and cinnamon in thousands of kilos.

The supply increased over the next two or three decades as Portuguese influence and control slid up the west coast to Goa and the Gulf of Cambay and had outposts on the coast of Coromandel and Bengal. The Arabs lost their dominance over the spice trade. The Portuguese had surfed the wave. They had arrived! Having tasted the blood and spices of India, they continued to come, to stay, to grow. The Dutch, French, English and others followed. The rest is history, but it all started with spices.

It’s time to dive briefly into a historical perspective of Anglo-Indian cuisine and what has influenced it through the ages. Colleen Taylor Sen, in her delicious serving of FEasts and Fasts: A History of Food in India does exactly that, starting with an interesting take on Portuguese influence:

“While the Portuguese imposed a quasi-westernization on the inhabitants of the Malabar region in the 16th century, they themselves lived much like the Indians. They chewed betel nut, drank arrack and hired Indian cooks. In 1670, at least 20,000 Portuguese and their descendants lived on the other coast, in the region of Bengal. For servants and cooks, they hired Moghs (people of Burmese descent) from Sylhet and the Chittagong Hills, who for centuries had worked as deckhands and cooks on Arab ships trading with Asia. from the South East. They quickly learned the culinary art from their masters and became famous for their bread, cakes and pastries. The British then recruited them as sailors and cooks, and today Sylhetis runs Indian restaurants in the UK and New York.

Soon Portuguese men ate Indian food with their fingers – usually rice, salt fish, mango pickles and other dishes they were completely unfamiliar with. Taylor Sen goes on to say, “The Portuguese capital, Goa, has become famous for its meat dishes, especially those made with beef and pork. Many classic Portuguese dishes, now called Goan delicacies – such as vindaloo, xacuti, fish and prawn balachao, and salted beef tongue – have been brightened up with the addition of spices.

The aroma of spices lingers in every AI house to this day, especially at lunchtime. Not as strong as a Goan or Tamilian home, but much stronger than a London restaurant serving curries for European palates.

As Bridget White, the community’s most prolific cookbook author, says, “My grandmother taught me to never overdo or underestimate the spice factor in our cooking.” If, as an Anglo-Indian, I have to thank the Portuguese for spicing up my life, quite honestly, I don’t need to thank the Dutch or the French for too much on my table. But let’s be fair to them by acknowledging some of their culinary contributions to us. We owe the Dutch the art of baking dough and the use of yeast, cutlets of minced meat or fish in the shape of a ball (what the Dutch call fricadelles), and curried beef steak (smore ). But it’s our equivalent in Sri Lanka, the Burghers – people of mixed European (mostly Dutch) and Sinhalese or Tamil ancestry – who have a lot to thank their ancestors for, as they have their own distinctive, Dutch-influenced hybrid cuisine. .

To the French, we say “thank you” for a few servings. The Anglo-Indian pancake and pan roll with a variety of sweet and savory fillings are derived from pancakes; Onion soup, breaded chicken (chicken goujon is the French name for it) and one of my favorites, the fish meunière – a lightly breaded fish. If you’re ever in Kolkata, try it at Mocambo, a vintage restaurant just off Park Street…life will never be the same!

In Pondicherry, a former French colony, there are still a few dishes that the French left behind: a stew called ragout, heavily flavored with garlic and aromatic spices; meen puyabaisse (fish bouillabaisse); the rolls (lamb stuffed with minced lamb) which are a New Year’s Eve specialty; and a rum-soaked fruitcake served at Christmas, known simply as Pondicherry Cake.

But it was the British who influenced Anglo-Indian cuisine more than other European settlers, dominating three of the four meals.

Until the 1970s, you would rarely, if ever, be served a non-British breakfast, tea or dinner. The usual lunch menu, however, was rice, dal, vegetable bhaji (pronounced doll and baaji in all AI houses at the time, and some still today), and curry; but it was an English breakfast and a very British dinner of soup, roast, fish and chips or chops, with Yorkshire pudding, and custard or bread pudding for the dessert.

As for tea, the whole concept was as foreign to India as the Mad Hatter tea party was to Alice. That changed when British women started sailing. Including sandwiches, even bread and butter, scones, cakes or pastries, and of course more than a cup of tea, it had more to do with club conversation or wholesome gossip. session in someone’s living room than the actual snacks that were served.

Excerpted with permission from The Anglo-Indians: portrait of a community, Barry O’Brien, Aleph Book Company.