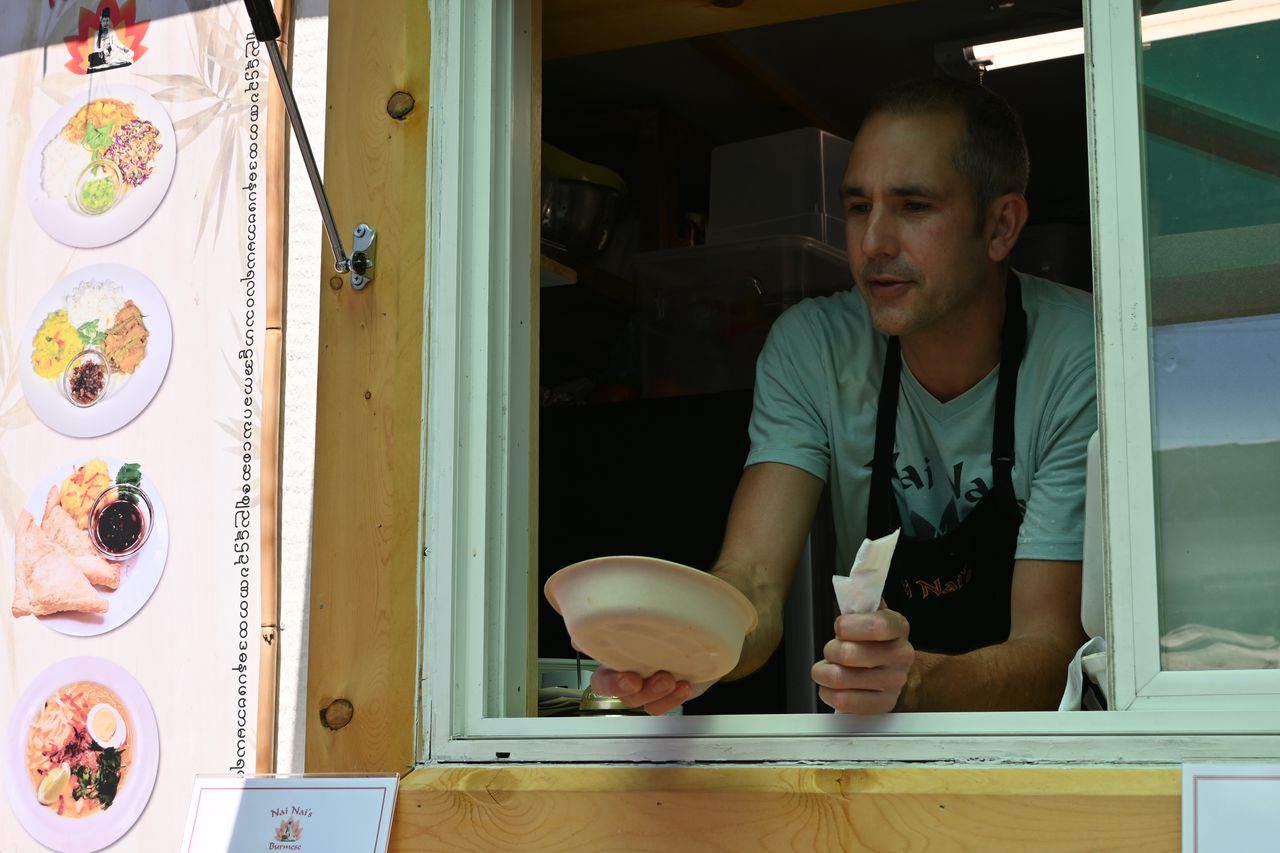 Indian, Thai, and Chinese cuisines are all prevalent and well-known, but one cuisine that incorporates the qualities of all three, Burmese cuisine, is not as popular in Oregon.

Corvallis’ restaurant scene, however, has just received a promising introduction to the cuisine of Nai Nai’s Burmese Snack Shack.

The dishes of Burma – now known as Myanmar, a Southeast Asian country west of Thailand – are comparable to neighboring countries, with an emphasis on the balance of a variety of textures and the use of fresh herbs and spices.

Nai Nai’s, tucked away in Common Fields Corvallis Food Truck Pod on Southwest Third Street, opened in early June. Owner Will de Glanville has made it his mission to recreate his grandmother’s dishes and share his love for Burmese cuisine.

Mary de Glanville, Will’s nai nai, would visit her grandson during the summer and prepare meals and snacks, all from memory. She taught Will how to cook as she got older. Her 1940s wedding photo is used as the logo of the food cart.

“A lot of it is about recreating that smell and taste,” de Glanville said. “Every once in a while I feel something and it just takes me back to being a kid.”

Dishes often incorporate contrasting textures, such as okra which is both hard and soft and different types of relish.

Many dishes are cooked with fish paste, including the national dish mohinga, a rice noodle dish with fish-based broth. Curry is also a popular dish, but milder in flavor than its Indian counterpart.

De Glanville had the idea of ​​opening a Burmese food cart in Portland for 15 years, but couldn’t start working on it until a year ago. He said seeing other Burmese businesses motivated him, and it was “lucky” when he was offered a place at the Corvallis food module.

Corvallis may be an unexpected place to eat Burmese food, but it’s one of the first in Oregon to have it outside of the Portland metro area.

Until recently, a food cart like de Glanville’s probably wouldn’t have survived Corvallis. The efforts of Portland’s Burmese community, however, helped cultivate the cuisine’s visibility enough to flourish elsewhere.

Kalvin and Poe Myint opened The Taste of Rangoon food cart in Portland in 2004. The couple ran it for about six months before selling it, putting their dream of running a Burmese restaurant on hold.

In 2019, advancements in technology brought the couple back to the food scene with a new venture: a ghost kitchen, a police station kitchen that delivers food ordered through third-party delivery apps. Customers embraced the virtual kitchen, so they were able to open a physical restaurant called Top Burmese, which now has four locations in the Portland metro area.

“Other Southeast Asian restaurants created the inspiration and paved the way for us,” Kalvin said. “I think every time you open something, you create inspiration for others to follow.”

Another influential Burmese food business is Sandy’s Myanmar Cuisine in Portland, a restaurant business run by Mya Sandy Myint, who goes by Sandy. She is Kalvin’s sister, but the two siblings’ businesses are unaffiliated. On and off since 2006, it has been serving Burmese cuisine and helping Burmese people in the city.

When she’s not cooking, Sandy acts as an interpreter for people who have just arrived from Myanmar, connecting them with needed resources. She also volunteers at a Burmese community garden, teaching people how to grow vegetables from their home country and cook their cuisine.

The two Portland companies helped establish Burmese food in Oregon, but it’s only now coming to fruition outside the region.

De Glanville hopes to move Nai Nai’s into a brick-and-mortar space, either as a small cafe or a tropical-themed bar with colorful cocktails.

“Cooking together in the kitchen is how my family communicates,” de Glanville said. “Burmese cuisine is synonymous with family.”

This story was produced by student journalists as part of the High School Journalism Institute, an annual collaboration between The Oregonian/OregonLive, Oregon State University and other Oregon media organizations. For more information or to support the program, go to oregonlive.com/hsji.