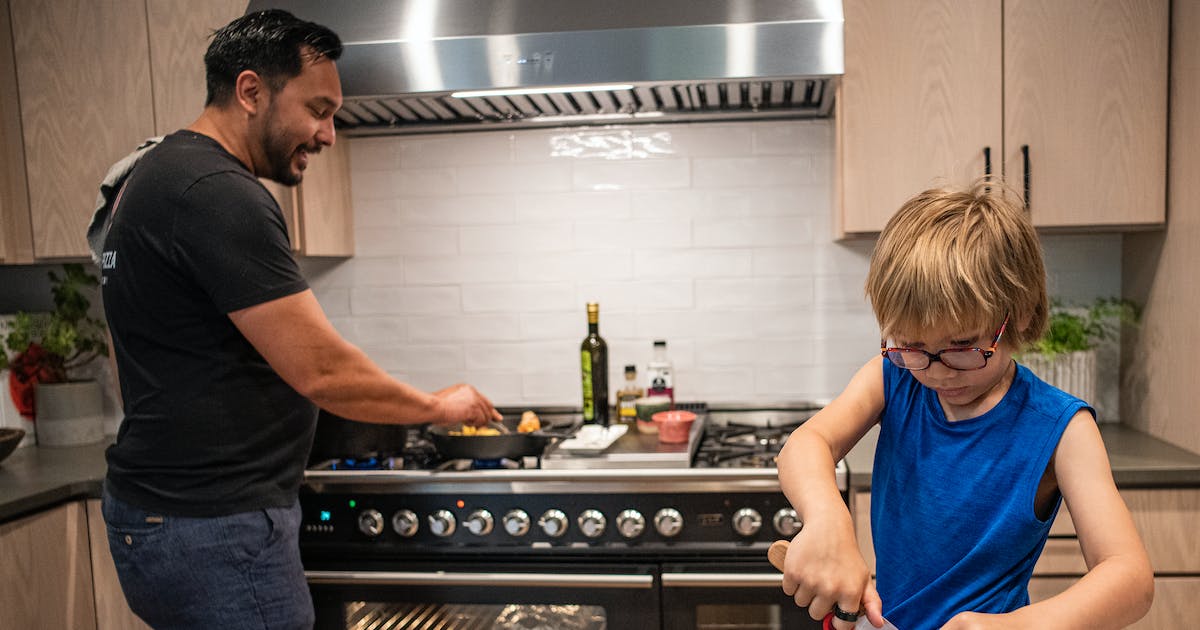 Chef and co-owner of Travail Kitchen and Amusements Bob Gerken credits Springfield-style cashew chicken, invented in his home state of Missouri, with inspiring him to open a restaurant.

A staple where Gerken grew up, the dish is a fried riff on the original recipe created by an enterprising Chinese immigrant in the 1950s. His version has become so popular that it has spawned dozens of small, family-run Chinese restaurants in the region.

“My friend’s parents owned some of these places, made money off this dish, and had very good lives,” he said. “Plus it was so cool that we could walk in and eat for free.”

Gerken was also influenced by his Filipina mother, who cooked from scratch every day: Midwestern staples like steak and mashed potatoes for her American husband and four children, as well as food that she liked: fish, rice, homemade and sautéed pickles.

But it’s his father, Bob Sr., or “Big Bob” as they call him, a reserved electrical engineer, who gets the credit for successfully getting Gerken into culinary school. “He brought the registration papers to my room and said, ‘Let’s fill this in now,'” Gerken explains. “I’m not sure I would have done it any other way.”

After graduating from Le Cordon Bleu College of Culinary Arts in Scottsdale, Arizona, Gerken spent time in kitchens in Arizona and Missouri (including a year working in front of the house to overcome his shyness and better understand food). hospitality and operations) before landing in Minneapolis. . He opened Work in 2010 with fellow chefs Mike Brown and James Winberg.

Their innovative concept and cuisine – multi-course fine dining prepared and served by chefs in a relaxed and fun atmosphere – has become the hottest ticket in town (literally, since admission requires a ticket) and the trio received several James Beard Award nominations. More recently, Gerken, Brown and Winberg have expanded their success into custom catering and events, a brewery called New Brewing not far from their Work restaurant in downtown Robbinsdale, and Dream Creamery, an ice cream, burger concept and fries in northeast Minneapolis.

Members of the Labor team were also the first champions of equal pay for the front and back of the house and, last year, when they faced a labor shortage work, they launched a two-year junior chef training program for high school students. “We just keep doing what makes sense to us,” Gerken said.

Gerken met his life partner, consumer strategy consultant Jen Olson, at Work in 2011. She was a regular at the restaurant’s pop-up lunch service.

“My star moment was when Bob pulled out mashed potatoes. I said they tasted like Joel Robuchon and they did,” she said. They have been together ever since and welcomed son Rhys in 2016.

During the pandemic, the family, including Olson’s mother Jan, who lives with them, downsized from a sprawling 5,700 square foot home in St. Louis Park. “Things were uncertain with both of our businesses and the house was just too big,” Olson said.

They found their new home in Minnetonka — a tiny 1980s two-story on nearly an acre of woods with nature views from nearly every window. The house was in good shape, but they remodeled the kitchen immediately instead of waiting and doing it later.

“I wanted a different stove,” says Gerken, who explains the merits of induction versus gas, steam, and convection, and what microwave (popcorn) ovens are for.

Gerken and Olson also wanted to refresh the space’s dated finishes and improve functionality for everyday family life and parties.

Since the kitchen was already open to the family room and had a decent work triangle, the couple focused their budget on new appliances and custom cabinetry – extending them to the ceiling for more storage, making room for a new wine fridge and adding an appliance garage. for storing small gadgets. They also replaced the cabinets with drawers in the island and got rid of the prep sink to provide more counter space.

Although Gerken’s dream stove wasn’t in the cards (it cost $40,000), he found something satisfying – a six-burner Ilve gas range with a wok, flat top, two ovens and a rotisserie. It is the center of the kitchen, especially when the couple receives.

“A lot of our friends are chefs, so it’s not just Bob who cooks,” Olson said.

Gerken has incorporated the principles of his restaurant’s cuisine into the layout; frequently used items are just an arm’s length step away, and there’s a place for everything to keep counters clean and uncluttered.

Although Olson adopted pro tips for designing her space, she didn’t want it to look like Gerken’s restaurant kitchen.

“It’s easy to go into work mode — efficiency, speed, precision — especially when you’re doing the same type of activities,” Olson said. “But we want our Bob, not ‘work Bob’ when we’re at home.”

She collaborated with interior designer Jennifer Davis to select a soft, natural palette that includes red oak slab cabinetry and white oak flooring throughout the kitchen and adjoining family room. The atmosphere is modern, calm and relaxed.

Cooks in the kitchen

Gerken does most of the cooking for the family from Sunday to Tuesday when the restaurant is closed. Like any busy parent, he tries to keep it simple and uses as few pans as possible. And even though “at home Bob” is more relaxed than “at work Bob”, he is still a chef and the family eats well.

“The skin becomes so clear,” enthused Gerken of the rendering technique.

Five-year-old Rhys has started showing an interest in helping chop, stir and squeeze limes, and he’s even started creating his own cheese dishes.

When Gerken is at the restaurant, Wednesday through Saturday, Olson said the family eats out, orders, or sticks to cooking tried-and-true recipes.

“My mom makes the best stuffed peppers with cauliflower rice and I make a world famous salad,” she said. “We do our best, but Bob is definitely the family cook.”