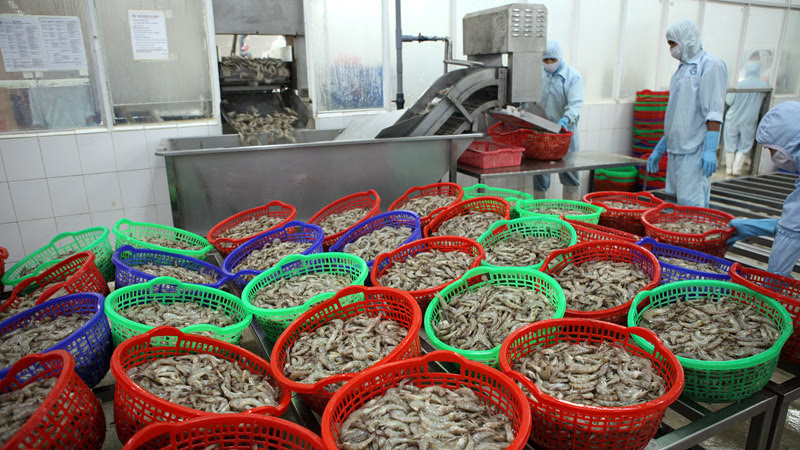 According to the Vietnamese Association of Seafood Exporters and Producers (VASEP), Vietnam’s seafood export turnover to China has reached $ 1.4 billion in the past two consecutive years, this which represents 17 to 18% of total seafood exports.

However, exports to the market have declined since the start of the year. At the end of the third quarter, exports to China accounted for only 11% of total seafood export turnover.

Since April 2021, exports to China have declined by 11-51% due to tighter controls on frozen seafood imports at major ports in the country, resulting in congestion and higher costs for Chinese importers and affected import / export companies.

Vietnam’s seafood exports to China saw a sharp drop of 36% in August and 51% in September, following the wave of Covid that erupted in mid-July.

For example, seafood exports to China were down 20.5% at the end of September from the same period last year to $ 768 million. Exports of shrimp and catfish fell 23 percent and 20 percent to $ 298 million and $ 279 million, respectively.

VASEP attributes the continued decline in seafood exports to China’s policy of tight control over SARS-CoV-2 in seafood imports, which has caused congestion at ports.

Since the third quarter of 2020, China has repeatedly said it has found SARS-CoV-2 on packages of frozen seafood imported from India, Ecuador, Russia and Indonesia. Hundreds of exporting companies from these countries stopped exporting products to China for 1-5 weeks. India alone has 70 such companies.

The GACC (General Administration of Customs of China) said it will strengthen the control of seafood from the cold chain. As of October 29, the GACC had inspected more than 400 international cold chain food producers and suspended 154 import companies due to worker infection.

The GACC took 3.2 million samples of imported food and found 499 samples that tested positive for SARS-CoV-2. The agency suspended imports from 221 international companies for one to four weeks.

According to Le Ba Anh of the Ministry of Agriculture and Rural Development (MARD), China has recognized 748 Vietnamese seafood processing workshops, 20 fresh seafood export facilities, while 48 species of seafood sea â€‹â€‹and 128 seafood products are allowed to be exported to the country.

China maintains SARS-CoV-2 review on packages, frozen seafood conveyances and fresh seafood, posing problems for exporting companies as their products have to wait in ports .

VASEP has estimated that seafood export turnover to China will be around $ 1 billion this year.

Vietnamese exports of aquatic products are expected to reach $ 8.4 billion this year, the equivalent of the 2020 figure, according to the Vietnamese Association of Seafood Exporters and Producers (VASEP).

Lack of raw materials and labor, rising production costs, and non-fulfillment of partner orders have all pushed seafood companies into a bind. Seafood exports have fallen.