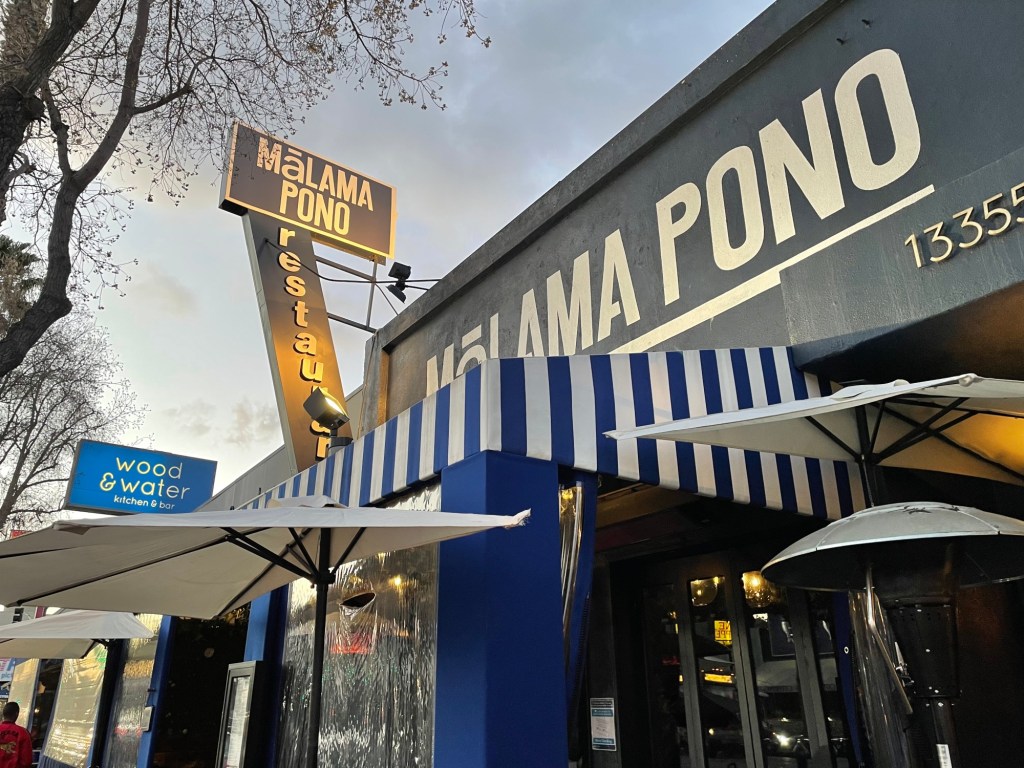 Let’s make this clear from the start: Malama Pono is not a cliché tourist cuisine Hawaiian restaurant, the kind of place you go to for dishes like loco moco, chicken teriyaki, chicken katsu, plated lunch – and if you live big, Spam musubi, so you can tell the neighbors in Dubuque about how they make sushi with Spam. And, of course, a luau. Which can be very good.

Do not mistake yourself; I love the kalua pork as much as the next guy in the baggy shorts and Hawaiian shirt. But that’s not what Malama Pono is about.

Malama Pono – the name means “Take good care of yourself” in a translation, but also “to live with a conscious decision to do what is morally right in terms of self, others and the earth…” – describes herself like “seafood“. -inspired restaurant…offering regional fusion cuisine with a Pacific influence…” That is to say, many of us have been eating here in SoCal for a long time, dating back to great destinations like Roy’s and even, on one level, the old Trader Vic’s. We’re on the Pacific Rim. Culinary influences are many. And they make eating here a lot of fun.

And so, at Malama Pono, which is a casual cafe on Ventura Boulevard, some distance from the row of sushi restaurants in Studio City, you’ll find loco moco. But it’s not the mess on a plate that it is at most Hawaiian-themed restaurants. In this case, it’s built around a very savory, herb-rich and spicy homemade pork patty, topped with a surprisingly edible porcini mushroom sauce – and, of course, the inevitable fried egg.

There is a “mixed plate”. But it’s not the usual hodgepodge – the mix here is chicken mochiko in a ponzu shoyu and tomato ginger sauce, with filet mignon, fish, Spam as good as ever, and a mac salad” à la locale”, made with cheese, it’s worth eating. Even if it ruins your cholesterol. Also, there are kalua pork lettuce wraps, made unique with pickled red cabbage and maple flavored Japanese mustard.

But then… what is it? Amidst this reinvented Hawaiiana, we find grilled shrimp and Parmesan grits – a dish with roots more in the southern United States than in the South Pacific. The homemade garlic caprese naan is a unique blend of Indian and Italian dishes. Chinese Shrimp Salad is made with kale and our (yet yet) beloved, fiber-rich green, baby kale. And duck confit with green papaya salad, cashew nuts and Thai vinaigrette owes its existence to Southeast Asia.

And is there sushi? Well… of course there are! And, it comes with a twist. Crispy rice, which is usually topped with spicy tuna, is in this case a fried spam delivery system, flavored with sweet soy, nori aioli and togarashi – seven-flavor chili powder. Yellowfin tuna appears on a second course of crispy rice, in this case with pickled shallots and ikura – red caviar. There’s also a third crispy rice option, this one topped with Santa Barbara uni, served with truffle ponzu, truffle oil and black tobiko caviar. Seriously forgiving. Well too!

The menu is a savory mix of dishes, generally staying within sight of its Pacific roots, but wandering far and wide when the flavors are good enough. As in the Seafood Risotto Balls, which are mostly Italian, but even more so Malama Pono. Steamed mussels, a wonderful dish, are almost French. But there’s mango and chili in the garlic butter, and it comes with homemade naan. That’s not how you eat your mussels in Marseille. And how about crabcakes from Maryland? They wouldn’t raise an eyebrow in Baltimore, not one.

Bottomline: This is a cheerful restaurant, with a menu filled with tasty temptations for those of us with pescatarian inclinations.

And for those who want to get closer to the taste of Kona, there are two beers served by Kona Brewing – Longboard Island Lager and Big Wave Golden Ale. From Maui Brewing there is Big Swell IPA, Pineapple Mana Wheat and Coconut Hiwa Porter. There are also cocktails made with wine and Japanese shochu, with names like Guava Girl, The Weekend and, inevitably, Hawaiian Punch. There is no pineapple wine. Give thanks.

Merrill Shindler is a freelance food critic based in Los Angeles. Email mreats@aol.com.