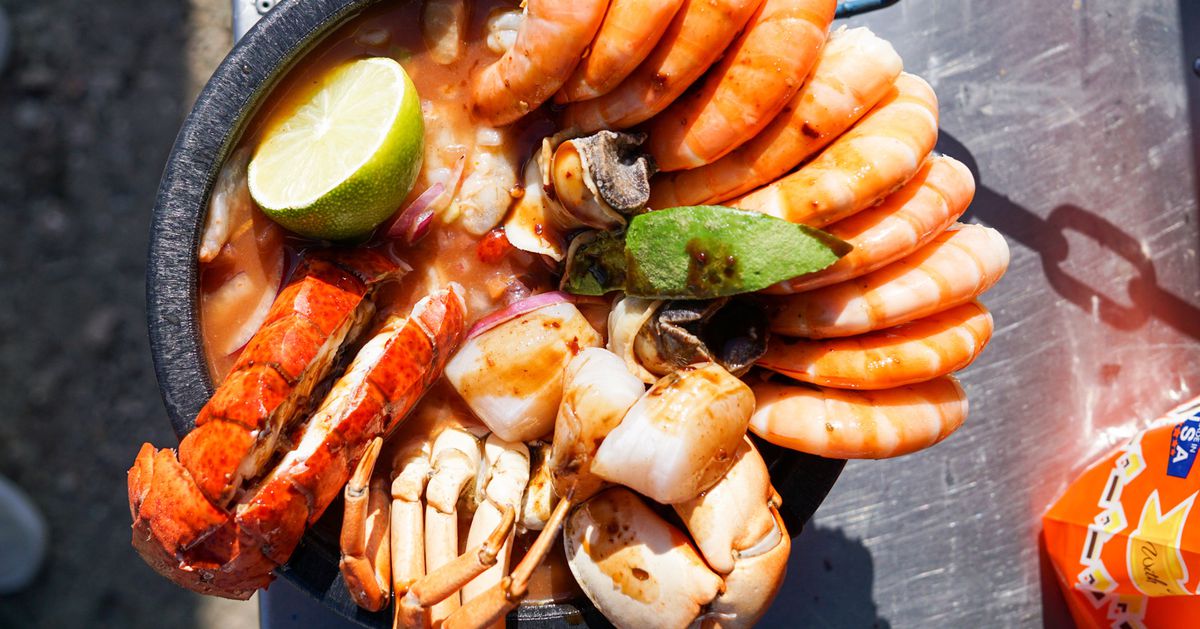 Sonoran cuisine has been in the spotlight in recent years due to the success of local Mexican-style carne asada stars like Sonoratown, Tacos El Ruso and Prime Tacos from Sonorita. And while Sonora’s carne asada traditions are certainly noteworthy, there’s so much more to regional cuisine than mesquite-baked steak tacos, burritos wrapped in sobaquera tortillas, colorado chili stews and hot dogs. wrapped in bacon buried under a pile of condiments. With its entire western border along the biodiversity of the Gulf of California, Sonora is also a destination for exceptional Mexican seafood; One of the most popular weekend breakfasts in Sonora is caguamanta, a stew of ray fillets, tomatoes, vegetables, shrimp and tuna fins in a spice-flavored seafood broth. and dried peppers.

Mariscos Odaly, a three-year-old food truck in Fontana, draws huge crowds serving this little-known delicacy outside of Sonora, Sinaloa and Baja California. Launched in 2019 by Gabriel Morales, the truck is run by the Hermosillo-born cook and his sons Osmar and Edgar. Mariscos Odaly, named after Morales’ daughter, can be found parked along a strip of gravel on a section of Valley Boulevard lined with large truck and fleet service dealerships. The rich scent of buttery seafood, ripe tomatoes and sweet peppers leads to a small blue trailer hitched in front of Odaly’s truck.

Caguamanta, a stingray stew, is poured into red soup bowls near the covered seating area. Originating in Ciudad Obregón, indigenous caguamanta recipes called for turtles, but the dish is now often served with stingrays to protect endangered species. At Mariscos Odaly, Morales serves up his family’s recipe, smooth from a little fat and full of plump Mexican shrimp, chunks of ray, surimi (imitation crab) and jelly tuna fin. It’s topped with a chiltepín chile crumble and dollops of house-made salsa brava with charred chilies and vegetable oil. The soulful seafood soup has drawn a steady crowd since the marsicos spot opened.

I came up with these dishes and decided to use the narco names because they are famous, not because I endorse or endorse what they do.

Recently however, Morales launched a TikTok account and quickly amassed 30,000 subscribers in just three months. As a result, the truck attracted more local customers and attracted an influx of faraway ceviche seekers from San Diego, San Jose, and the San Fernando Valley. Seafood-centric content catching hungry eyes on the TikTok account are molcajetes – extravagant ceviches prepared in Mexican volcanic stone mortars and named after infamous members of the Mexican cartel, including Chapo Guzmán, Caro Quintero and El Mayo Zambada; there’s even a molcajete named after current Mexican President Lopez Obrador. “I imagined these dishes and decided to use the names [of narcos] because they’re famous, not because I endorse or approve of what they do,” Morales says. (Morales had a brief encounter with the cartel years ago when organized crime members approached his Mexicali-based cheese company, Quesos Odalys, to transport drugs in shipments. He moved to the Inland Empire in 2019 and launched Mariscos Odaly following the event.)

The El Chapo molcajete ($60) is loaded with high-end seafood, including a whole lobster, callo de hacha (clams), large cocktail shrimp, cooked octopus, raw Mexican white shrimp and crab claws from stone in a pool of lime and Mexican cocktail sauces, and sprinkled with crushed chili pepper and seasonings. The Lopez Obrador molcajete is $50 and does not include lobster. “I named it after a politician because todos los politicos se la pelan,” says Morales, which translates to “all politicians rip off the public.”

Charolas (seafood take-out trays) delivered on jumbo aluminum trays are also on the rise. The $150 culiacanazo feeds 12-15 people and includes a giant lobster, dozens of shrimp, rows of crab legs and several pounds of high-quality shellfish topped with halved limes, sliced ​​cucumbers, red onions and avocado. In addition to the luxury seafood preparations that are racking up views on TikTok, Morales also serves more understated, traditional fare like smoked marlin tostadas, seafood cocktails, and an incredible selection of imported clams and oysters. from Mexico, such as callo de hacha, white clams, pata de mula and chocolates. Seafood dishes are prepared in the trailer, which functions as a cold bar for the food truck operation.

Whether diners come for the stingray soup or the larger-than-life molcajetes, all recipes are inspired by Morales’ Mexican upbringing. “It’s part of my childhood, growing up and fetching seafood from the carts by the beach [in nearby Bahia de Kino]and I used to make ceviches, seafood snacks, and seafood cocktails for my family in Mexico,” says Morales.

There’s no other Mexican seafood truck or cevichería in the greater Los Angeles area that dabbles in luxury seafood preparations like Mariscos Odaly, with dishes using everything from real crab to Mexican clams. and lobster. Add caguamanta to the ritual Sonoran seafood breakfast, and Fontana has an upscale seafood destination on your hands — banda and chili peppers included.

Mariscos Odaly is located at 14166 Valley Boulevard in Fontana, and is open Wednesday through Sunday from 8 a.m. to 6 p.m.