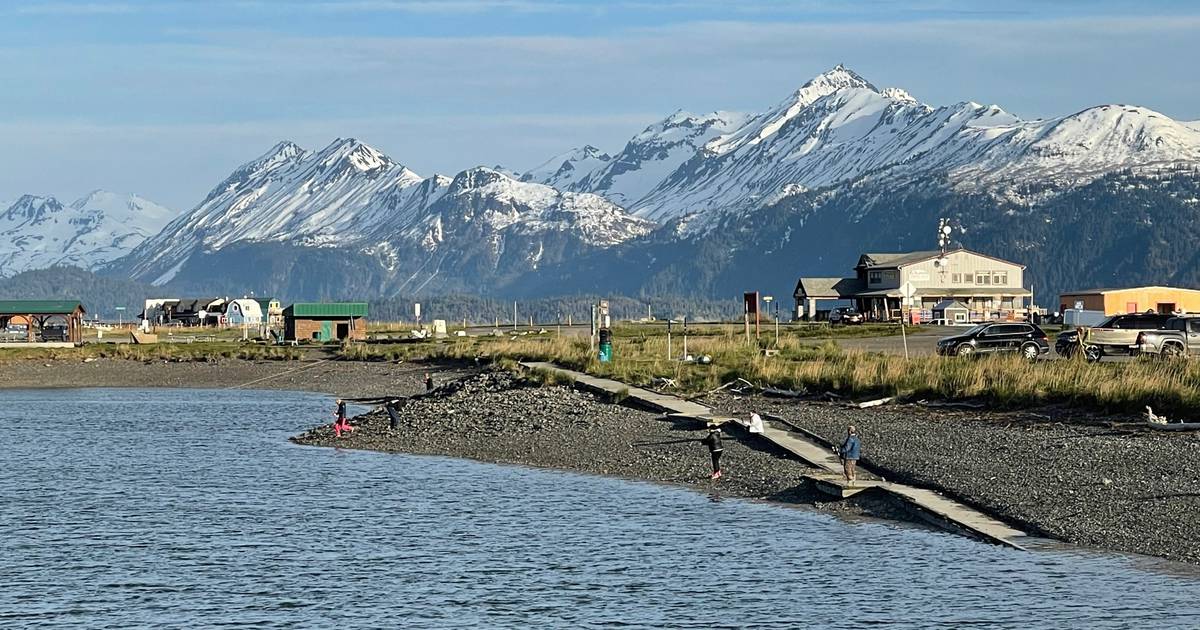 Fishing season comes to life in Homer, the halibut hub with a salmon-killing ‘mayor’

The 77-year-old salmon sultan has just caught, killed and bled his second king salmon this sun-drenched evening and the retired fisheries biologist is fumbling for his harvest ticket.

“I have to fill out my ballot,” Schroeder says, rinsing his hands in the cold waters of the Nick Dudiak Fishing Lagoon on the Homer Spit.

One of those gruff but lovable types, Schroeder punctuates his sentences with loud, rapid laughter that echoes across the lagoon waters. On this Sunday at the end of May, he managed to land his limit of two fish in about 90 minutes. None of the dozen or so anglers fishing alongside Schroeder and his rickety white plastic lawn chair catch any.

“This perch here caught more king salmon than most people would ever have imagined,” he said with another chuckle.

They don’t call him “the mayor” because he’s politically correct.

You read correctly. Schroeder fishes “proxy” tickets for friends who can’t fish their own salmon, which means he can catch multiple season limits on behalf of others. Fishing-hole regulars say no one comes close to creating as much carnage as Homer’s resident wizard.

How do you think he does it? What makes it so good?

Practice certainly helps. Schroeder has been fishing the lagoon since its inception in the early 1980s as a recreational hatchery fishery for king and coho salmon. The choice of bait is also essential. Schroeder said he baits his double hook rig with herring and a “secret” ingredient – which isn’t that secret.

“Damn, they sell it across the street,” he says, pointing to the Tackle Shack Co. building on the other side of the two-lane asphalt tape that bisects the narrow strip of land pushed in Kachemak Bay.

Schroeder said he adds a small piece of Pacific mackerel to his hooks, then throws it in and waits patiently — perhaps the key part of the equation. Once the bobber starts shaking, he says anglers need to give the fish time to take the bait.

“Give them a count between four and six,” he says. “One, two, three, four…boom!”

Schroeder laughs again and grabs his bucket and plastic chair before making the short trip up the embankment to his waiting SUV. The only problem with proxy fishing is that Schroeder still has to clean the fish himself.

Schroeder’s luck has been unusual on the spit this spring. King salmon arrived late, with low catches reported in both the fishing hole and marine fisheries until last weekend. But salmon are unpredictable and a big push of fish could hit the spit literally any day, according to Ginny Grimes, who owns the tackle shop near the lagoon with her husband, Shawn.

“It could be the next tide,” Grimes says as she unpacks boxes inside the cramped store she and her husband bought last summer.

As she says this, a group of local teenagers pass the large bait cooler filled with herrings and enter the store. You can tell they’re from Homer by their shoes – the only one not wearing Xtratuf boots is barefoot.

As the boys wander through the shop, Grimes points to a skinny kid wearing sunglasses.

“That boy right there is the fishing hole killer,” she said.

The young gun to the hole is 15-year-old River Henry, and he’s a fly-fishing prodigy.

Henry said he probably caught 60 hole kings last season and kept his season limit of 15. Like a wily veteran, the young Jedi keeps his secrets close to his hoodie and said he never couldn’t divulge exactly what kind of flies he uses.

“It’s top secret information,” he said with a smile.

The man-made lagoon isn’t the only place to find fish around Homer. In fact, the small seaside town dubbed the “Halibut Fishing Capital of the World” practically runs on the smell of kelp and carcasses. Near the small boat launch, two fishermen fish from an abandoned boat launch while blasting AC/DC. At the end of the spit, tourists cast bait near the ferry terminal while sipping beers. In Kachemak Bay, boat fishermen rig downriggers for salmon and soak herring for halibut.

It’s a town of fish.

At the fish cleaning table near the harbor, Chris Perk, a longtime Homer High teacher and trainer, cleans a nearly 10-pound king he caught earlier in the morning while fishing aboard his boat alongside his golden retriever, Daisy.

“It’s the perfect size for the smoker,” Perk says as he runs his long fillet knife along the salmon’s spine.

After 25 years at Homer High, Perk is retiring this spring. He and his wife want to be closer to their grandkids, so they’re moving south for the winters — a bittersweet transition for sure for a guy bleeding Homer Mariner blue and gold.

Fishing has been slow this season, which Perk says is unusual. At this point in the season, he’s usually able to push a limit every time. Not yet in 2022.

“It’s a little weird,” he said. “I feel really lucky to have caught this guy.”

Perk’s smoked salmon is a neighborhood favorite and he’s more than willing to share his “secret” recipe.

With a little encouragement, Perk says he actually has a trick that makes his salmon even smokier. And like the mayor’s advice to hang kings, it has a lot to do with time.

“I change my chips every six minutes,” he says.

Perk’s technique is to set a timer and then “mow the lawn or watch a baseball game or something.” During this time, he returns to the smoker to repeatedly change his wood chips, which prevents the fish from “cooking” and provides a richer flavor as the fish smokes. Is he good? Well, Perk said he never needed to use vacuum bags for his fish.

“It does not last long.”

Last weekend was a big hit with locals, but that won’t be the case any longer as Homer braces for a flood of visitors looking to fish and frolic in the iconic seaside town of boardwalks and beaches. Some have already arrived, including Benny Chitxeuane of Boise, Idaho, who came to Homer for the nuptials of Tom and Leilani Zywicki of Palmer.

While fishing from the beach near the end of the spit, Chitxeuane’s face lights up as the tip of his rod begins to twitch. Tom Zywicki tells him to start swaying.

“Keep shaking! Keep rocking!” he shouts to his best man as Chitxeuane struggles to bring his catch back.

Suddenly the water breaks and a small halibut emerges attached to the end of the Chitxeuane line. The fish probably only weighs a pound, but for the first visitor to Alaska, it might as well be Moby Dick. Chitxeuane smiles broadly and claps a friend’s hands. He is almost in tears of joy.

“My first halibut!” he shouts.

After releasing the fish, Chitxeuane says her entire trip to Alaska was life-changing.

“It’s probably one of the greatest experiences of my life,” he says. “What I learned and will take home, I will never forget.”

Moments like this are what draw people to Homer and keep them coming back. Chris Perk said locals dread busy midsummer days “when you can’t turn left”, but he acknowledges the special nature of his hometown. That’s why he plans to bring his grandchildren back to the Spit every summer for as long as he can.

“It’s a matter of memories,” he says.

As the sun begins to set on another memory of blue skies, a lone bagpiper walks toward the shore and stands before the blue waters of Kachemak Bay. Suddenly, the sound of the seagulls is temporarily drowned out by the mournful groan of the pipes. “Amazing Grace” drifts on the wind, joining the scent of seaweed and salmon as they travel through the air.

Spring has arrived on the Homer Spit. How sweet the sound.

Matt Tunseth is a freelance writer from Alaska who grew up fishing on the Kenai Peninsula.