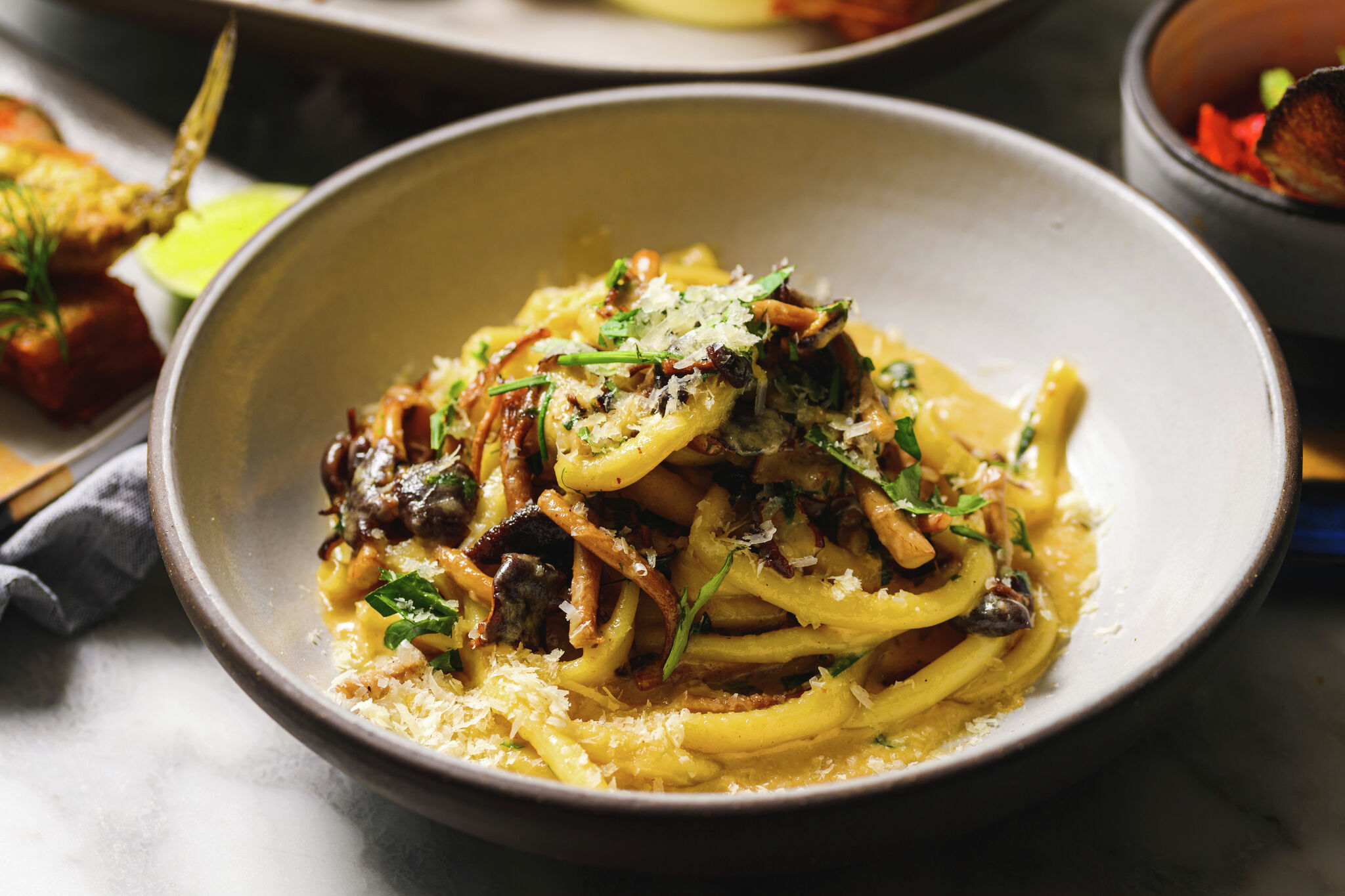 Chef David Standridge greets our table wearing his trademark New York Yankees hat (a bit of an outlier on the Connecticut East Coast) and suggests we try the smelt. If the first development was fun, the second left me perplexed. Smelt? Really? To borrow the phraseology of those who live much further inland: “it’s not food, it’s what the food eats!” I trusted the chef, tried the fried smelt, and then felt a strong urge to eat everything else on The Shipwright’s Daughter menu. You should too.

Standridge, a Yankee by birth and MLB affiliation, was raised in the Appalachian region of northern New Jersey, the offspring of an Appalachian tail grandfather in Alabama. Growing up foraging and fishing was a natural part of family life, and the tradition of home cooking inspired her early experiences with food. “Flavor profiles, that kind of stuff, they stick with you,” he says. “It can almost be genetic with food and wine.”

Fast forward. Standridge, now a graduate of the Culinary Institute LeNôtre, works at Quattro at the Houston Four Seasons. What did this classically French-trained chef working in a gourmet restaurant eat in the kitchen? “Mostly Mexican food,” he jokes. “Working in Texas, I was exposed to all these flavors…moles, especially how expansive and changing they can be with the seasons.”

Add these flavor profiles to his repertoire, and add two small plates to our table.

The first, pickled local squid served with spring vegetables and sourdough bread, is an example, Standridge says, of growth throughout his career. The inspiration here was Mexican escabeche, marinated vegetables served with fries and salsa. Oily and vinegary, with a few tender sprouts and slices of spring root vegetables, the bowl glows bright purple with added beets. “We get the squid very fresh, and if you cook it and put it in the oil quickly, you can keep that fresh flavor,” he explains. “It keeps longer, so you don’t always need it, it helps the food cycle.”

Dropped onto the pending homemade sourdough, I can’t help but think it would be a pretty sublime snack while enjoying a drink in the Shipwright Bar, just as our drinks arrive.

The second plate is a pig’s head served in a kind of crispy terrine on a green mole marinated apple, coriander and pistachio. This too would be a great accompaniment to a few drinks, and once again shows the chef’s Oaxacan influence. In the summer, he’ll prepare squid ink mole with pickled blueberries and kelp under locally-caught dry-aged tuna.

The plate itself attracts the attention of my companion. She runs her hands over it, and I later remember asking Standridge to stock up on other materials at Shipwright’s Daughter. Much of their tableware is produced locally by artisans like Lyndsay Meiklem Dean at Glaze Handmade, and business partners Amee Hussey and Magaly del Castillo at Ahmee Ceramics, both in Stonington.

Our drinks are of the gin-bowl variety, the choices simply named on the menu as Citrus, Floral, Savory and Spice. I choose the Savory, an icy mix of Hendrick’s gin, Mastiha Antica, bitters and celery tonic, and enjoy the complex feel of flavors in the drink, as well as the fresh aromas of the cucumber garnish. Seasonal cocktails, like the 24 Carrot (homemade ginger-infused vodka, carrot-infused ice cream, limoncello and basil), change at the behest of mixologist and bar manager Claire Procaccini.

Standridge left Texas to help open Atelier Joel Robuchon at the Four Seasons in New York in 2006, remaining available until 2012. “In Houston, I felt like I could do anything. I came to New York, and it was a whole new world,” he admits. He attributes the experience in part to his vision of never being satisfied with his latest creation. “I always try to do the next thing. I am relentless.

The next new thing on our table is the oysters, which I can’t resist if they’re available, and the chef’s recommended fried smelt. I choose roasted oysters instead of raw oysters, just to see what Standridge and Sous Chef Michael McHugh can do with them. They arrive four abreast, basking in ruby-colored spicy herb butter, garnished with coriander and peppery microgreens. The oysters seem to disappear as soon as they touch our table, which overlooks the heart of Mystic Village. Will be sure to double order next time.

“I’ve always wanted to work on the New England coast,” Standridge says. “I came across Mystic at a birthday party, saw the culinary scene, and got a job at Whaler’s Inn (upstairs from Shipwright’s) in 2019. Bravo Bravo had been here for 20 years , but we restored it down to the studs and developed the whole notion.

“I wanted to do something that reflects Mystic and fits into the environment, but a next generation, bringing world-class restoration.”

As a proof of concept, Shipwright’s and Standridge have since been nominated for Best Restaurant and Chef in the State by the Connecticut Restaurant Association.

Take the crispy fried smelt: the little fish are butterfly-fed and served tail-on, like fried shrimp, in a dragee of kelp and flour. The kelp, says the chef, is what changes the fish, on the plate and in the waters of the Sound just offshore. The fish live among the purifying fronds of the algae, which keep their meat super light and brackish, just the opposite of what I expected. It’s served alongside a small wedge of gem lettuce with a dollop of creamy peppery dressing, and on a square stick of “layered potatoes”, almost fish and chip style.

The latter is an indication of the thought that goes into even something as seemingly simple as a wedge of potato at Shipwright’s Daughter. The potato is first made almost transparently thin on a mandolin, then covered with cream and herbs, stacked and fried golden brown. Soft on the inside, crispy on the outside, one bite and my Irish heart almost burst into song. Instead, I later ask Standridge “why smell?”

“All the fish on the menu is because it’s local, and we can get it,” was the response. As simple as that. “We serve what we can. That’s how we can serve fishermen, because it’s a tough industry for small boats. We get it from Josiah Dodge here — we don’t import anything.

“I really like small fish. Underutilized species,” he laughs. “Most of the fish I want are on the bait list.”

As if to prove his point, a small plate of mackerel lands on our table during dinner, uninvited. A rung in the smelt food chain, I have personally used this fish as bait. The difference between cynicism and skepticism is that with the latter you can change your mind, and, dear reader, mine was.

A marinade through the tasty, yet surprisingly soft fish. A blend of rich, wholesome oils from the mackerel itself and a tapenade of kalamata olives melting and resting on sourdough toast. My mate and I are halfway through the dish before I think of adding a comma of deep emerald mash to the plate, and we’re rewarded with bright, herbaceous, aromatic parsley. A dish that my eyes had skipped off the menu became a favorite of the night.

It’s not just seafood at Shipwright’s. Standridge, McHugh et al. want to present a special dining experience, not a narrow focus. In that vein, I opt for the Painted Hills (Oregon) beef striploin (with more of those layered potatoes), king’s trumpet mushroom, and shishitos. The beef is a perfect rare medium, and served sliced ​​with a dollop of airy béarnaise foamtaking a classic combination and adding skill and delight.

I pair it with a glass of Gal Tibor “Titi”, a red bikaver from Egri, Hungary. Deep and rich, like a fruitier Cabernet, it is part of a curated wine list by Kathleen Standridge.

It’s all part of a collaborative effort, from fishermen to McHugh, a Rhode Island native, with his local knowledge of suppliers, like the Seacoast mushrooms in our bucatini plate. “The interest here is that people can go out and have a formal dinner and have it extra special, but you can also come in and have breakfast, our Scrimshaw coffee during the day, or snacks with happy hour,” sums up standridge. .