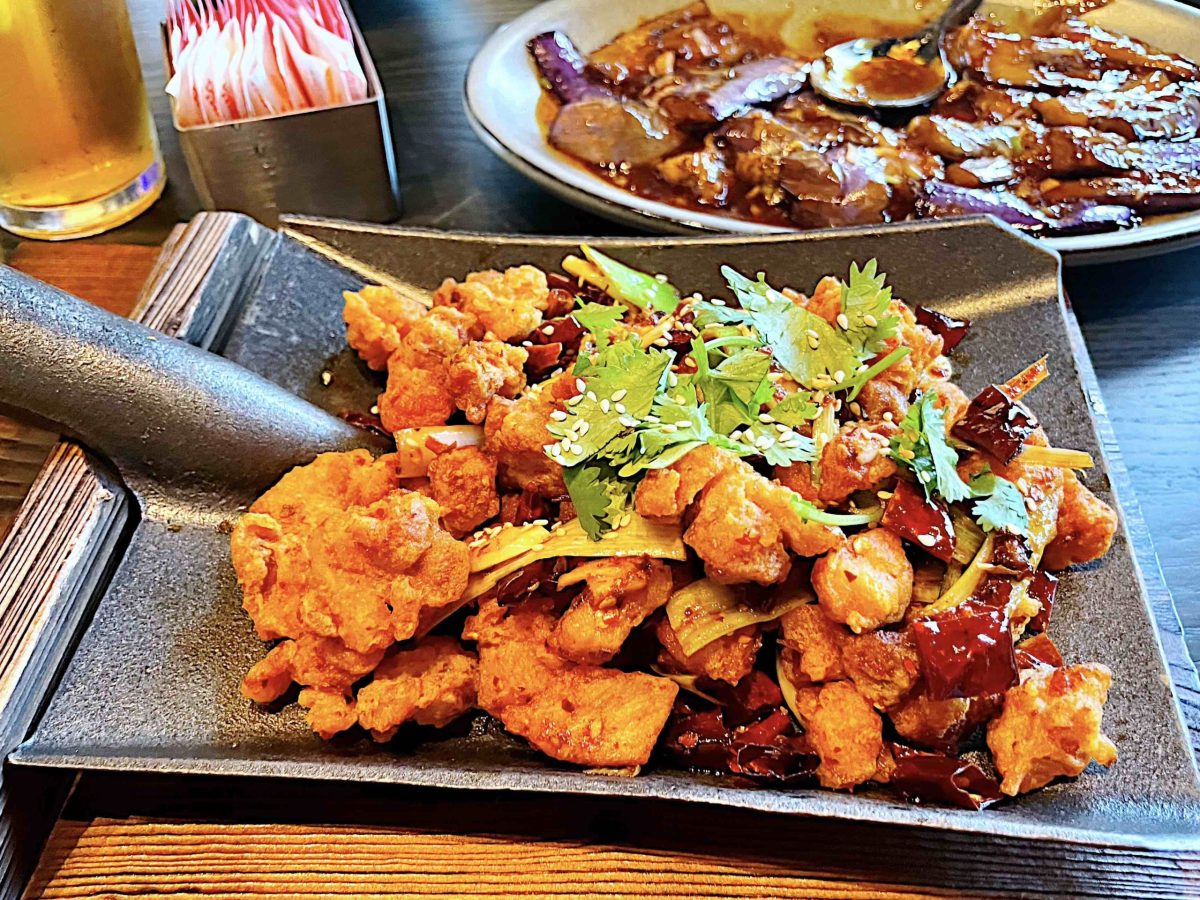 Ask a Houstonian where out-of-town diners should eat, and a handful of restaurants will be included repeatedly in their recommendations: The Original Ninfa’s on Navigation, Hugo’s, Himalaya, Crawfish & Noodles, and Bistro Mala Sichuan – most likely the Chinatown original. This is the place that was named a finalist for the James Beard Award. However, the newest location up high – a beautifully designed space in the MKT development at 600 North Shepherd – can now be my personal go-to (although I still recommend out-of-town visitors go to Chinatown).

This is the fifth location for Cori Xiong and Heng Chen, the wife-husband team behind Mala Sichuan. He joins the couple’s others in Chinatown, Montrose, Katy and Sugar Land, which have become well known for serving exceptional Sichuan cuisine and for exploring the nuances of the region’s cuisine with dishes such as tea smoked duck and dan dan noodleswhich uses the spicy chili peppers and Sichuan peppercorns often associated with the province’s eating habits.

Not only is the new location closer to my home (freeing up trips to Chinatown for other exciting restaurants), it’s beautifully designed by Braverman Gin and his team at gin design group. Inspired by Xiong’s childhood in Chengdu (the capital of China’s Sichuan province) and the surrounding countryside, the breathtaking interior features a life-size pagoda roof handmade in Sichuan by local artisans . The wooden structure, which was shipped in two halves, hovers above a central seating area lined with stone bricks and light beige banquettes, evoking a traditional Sichuan building.

The bar is covered in traditional terracotta tiles, transforming the rustic material into a sleek, modern element where guests can enjoy cocktails – a first for Mala Sichuan. The bar is separated from the entrance by an intricate partition made of abacus, the original calculators, which Xiong learned to use while studying in Chengdu.

The aesthetic vision Braverman brought to life is the culmination of a journey Xiong began when she immigrated to the United States in 1997. Her father, a food engineer, arrived first and eventually opened Little Sichuan Cuisine, a restaurant in Plano. Xiong worked there during summer vacation from the University of Texas, where she studied economics and met Chen. After graduating from college, the couple began looking for dining spaces that fit their limited budget. They found one in Houston’s Chinatown, a neighborhood they thought was receptive to Sichuan cuisine without being saturated with Sichuan options. At that time, many restaurants in Chinatown were Cantonese.

They opened the first Sichuan Mala in 2011 to rapid critical acclaim. Longtime Houston Chronicle food critic Alison Cook named it No. 26 on her first list of the 100 Best Restaurants, which was published in 2012. Five restaurants later, Xiong, Chen and Braverman have created space which reflects this evolution while remaining rooted in Sichuan. culture — a space that equals the beauty of food.

The food, which we were invited to try, includes Mala Sichuan classics such as pillow, warming red oil dumplings stuffed with pork and served in chili oil and a sweet and spicy nutty soybean paste – the ultimate comfort food. Diners will also find other classics like Spicy boiled fish in water; braised eggplant in spicy garlic sauce, which is one of the best eggplant dishes in town; and sspicy and crispy chickenChicken bites fried with dry red chillies, whole Sichuan peppercorns and served with mala seasoning and fermented bean paste.

The Heights restaurant also offers several new dishes developed for this location. These include Shrimp Mayo: Shrimp fried until crispy but still light and served with a sweet mayo sauce and fiery mala chili powder. Pro tip: Dip the shrimp in the mayonnaise sauce, then dip them in the chili powder until lightly coated. The resulting bite is an invigorating blend of sweetness, spice and crunch.

Other new dishes include: squirrel tail fish (fried and scored basa fish – squirrel tail refers to how the fish is cut, not a type of fish – coated in a tomato-based sweet and sour sauce and topped with pine nuts); Little Fantastic Chicken (a quarter ground, bone-in, skin-on chicken sautéed with jalapeño and served with fermented bean paste); three cups of chicken (chicken and basil simmered with sesame oil, soy sauce and sugar); Chicken Stock Stickers (the pork, scallion, and sesame oil filling is cooked in chicken broth instead of water, so it’s juicier and has a richer mouthfeel); Supreme Bamboo (sautéed young bamboo shoots); and Dried vegetables in a pan (potato, cauliflower, lotus root, king oyster mushroom, ear mushroom, green bean and tofu leaf seasoned with ginger, garlic, dried red chili peppers, Sichuan peppercorns, hotpot sauce and fermented black bean). According to Xiong, some of these dishes may eventually be available in other places.

As in other places, you can end your meal with an airy thousand pancake cake, composed of 20 layers of thin crepes, each sandwiching a layer of pastry cream. The heights location offers four flavors: tiramisu, Nutella, vanilla caramel and matcha. The last one, which we tasted, is a pleasant and not too sweet expression of the nutty and vegetal notes that make sipping green tea a pleasurable experience. Unique to this location is Crunchy Peanut Mala Ice Cream, a collaboration with its neighbor MKT Honeychild Sweet Creamswhich also sells this singular blend of spice, crunch and creamy sweetness.

The Heights offers another first for Mala Sichuan: cocktails. veteran bartender Chris Frankel makes a dozen cocktails. Each is inspired by a different Chinese zodiac animal and incorporates flavors that complement Mala Sichuan dishes. Six are currently available, and the next six are expected to roll out mid to late October. The drinks have playful names such as Friendly Tiger, Silent Rooster, Crystal Dragon, Dancing Goat, Laughing Monkey and Jade Rabbit, and ingredient combinations as clever as nicknames. The friendly tiger is a blend of oolong-infused bourbon, orange marmalade and orange bitters, while the dancing goat combines jasmine infused gin, basil, cucumber, lime and cucumber tonic. The bar also offers a targeted selection of beers and wines.

Thoughtful design elements, from the floating pagoda roof to a haunting ginkgo leaf mural, combined with exceptional dishes – both classic and new – and intriguing cocktails make Mala Sichuan’s Heights Restaurant a worthy destination, even if you frequent the other places regularly.

Hours of operation at the heights location are currently Wednesday-Monday 11am-10pm, closed Tuesdays.