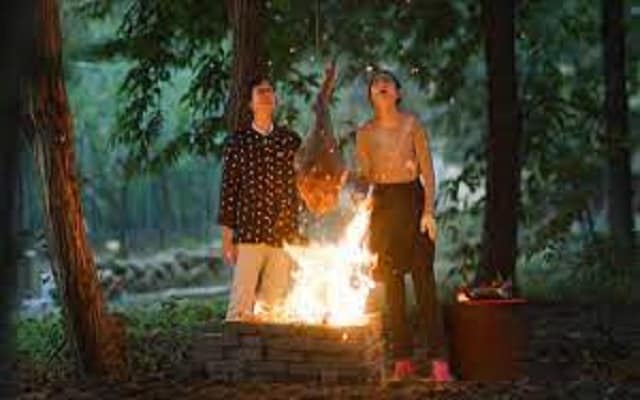 How cooking and enjoying food scenes make K-dramas even tastier

Over the past decade, a slew of Korean shows have used aesthetic food scenes to effectively showcase cultural pride, friendship, love, and a host of other emotions.

“Anywhere else in the world, ramyeon without broth would be the most popular,” South Korean actor Ryu Soo-Young says in the first episode of Netflix’s documentary miniseries. K Food Show: A nation of broth (Ryu is one of the three hosts; the other two are actor Ham Yon-Ji and artist Huh Young-Man respectively). “But in Korea, everything revolves around broth. Is it salty, is it spicy? For us ramyeon is not ramyeon without the broth. The captions also helpfully point out that South Korea has the world’s highest consumption of instant or dried ramyeon. A nation of broth is the latest in a series of Netflix documentaries on Korean cuisine, including Korean Pork Belly Rhapsody (2020) and Korean Cold Noodle Rhapsody (2021).

And the show is really warm and inviting and healthy – you know, like a bowl of hot broth. In the opening episode, the trio travel to Jeju Island in South Korea, to an old establishment that serves a famous seafood ramyeon bowl. Each generous serving is said to have local crab, octopus from small to medium sized (served whole, not chopped), an abalone (Ham’s still squirmed as the soup steamed on the table, prompting encouraging nods from others). The noodles themselves would be al dente to avoid overcooking (a common precaution in restaurant kitchens) and finally, the glorious broth itself, its taste enhanced by using the establishment’s seafood broth, the preparation for which we have been shown separately.

A nation of broth is classic ‘slow TV’, winding pleasantly from one low-key culinary escapade to the next. But the enthusiasm of the three hosts, along with their little asides about the cultural significance of soup/broth in Korea, got me thinking about the importance of food — and aesthetically shot meal sequences — in Korean shows and movies as well.

Mukbang: K-dramas and the art of eating

Over the past decade, a particular genre of internet video originating in South Korea — whether on TikTok, YouTube, or any other platform — has become hugely popular across the world. This is a “Mukbang”, in which the streamer or person uploading the video eats large amounts of food while talking to the audience about what they are eating, how it is prepared, and other nuggets of information. A good Mukbang is marked not only by the variety or quality of the food, but also by the enthusiasm and sense of joy conveyed by the streamer.

You can see the imprints of such videos in a wide variety of popular K-shows over the past decade. Not to mention, there are shows that predate the genre that kind of show us why and how South Korea is the birthplace of the Mukbang itself.

The 2016-17 Show Weightlifting Fairy Kim Bok-joo featured many scenes along these lines, each marked by the unmistakable vertigo of the Mukbang. In a scene that has now become a Mukbang classic (and widely shared on social media), the show’s titular protagonist shows her friends how to properly enjoy a typical Korean barbecue. “If you eat at a Korean barbecue without any strategy,” she says, “you will be full very quickly. To enjoy such a feast, you must follow this order. First come the small and tasty pieces of meat freshly grilled. Then there are slightly larger slices of marinated meat that are grilled or shallow fried and served straight from the pan. At this point, Kim says, order the fried rice, which is a staple of barbecues. Finally, as a palate cleanser, you have cold noodles to finish off the feast.

Shows prior to the Mukbang craze, Dae Jung Geum Where Jewels in the palace (2003) is a prime example of how food is linked to memories, madness, and romance in K-dramas. Lee Young-ae stars as the titular protagonist, a 15e orphan cook of the century who rises through the ranks to become the king’s personal physician. She does this by skillfully cooking the King’s favorite foods, foods the King has an emotional connection to.

More recently, the Korean show squid game became one of Netflix’s biggest international success stories. Indian-born actor Anupam Tripathi (who played Ali in the series) was part of the cast of squid game, and his success has led many Indian fans to look at his other work as well – he often plays characters that highlight the difficulties of being an Indian or a Pakistani immigrant in South Korea. In the reality show Alone at home (2013; also called I live alone), Tripathi showed off her cooking (and eating) skills in front of some of her co-workers from various Korean shows. Tripathi first prepares a cup of chai before making a very simple and standard homemade chicken curry, the pieces first being marinated in a basic mixture of turmeric and salt, with a little yoghurt for good measure. He then makes parathas, helpfully explaining to his Korean friends the difference between paratha and naan. What is remarkable is that Koreans who watch Tripathi say “how well he eats” almost as much as “how well he cooks”.

It’s all very healthy and enjoyable and also teaches you how people from different parts of the world have wildly varying ideas about ‘staple foods’.

Food as a Marker of Pride, Pathos or Redemption

In the 2011 South Korean series Kimchi Familyalso called Fermentation family, Song Il-kook plays a mobster who has turned over a new leaf and now works at a kimchi (a Korean side dish, usually made of salted and fermented vegetables) restaurant run by two sisters. This is just one of many K-dramas where the preparation and subsequent consumption of food is tied to a sense of cultural pride as well as the occasional flashback – that flashback could be in the service of pathos or as in Kimchi Family, serve as a redemption arc for the protagonist. From destroying lives and tearing families apart, Song Il-kook’s character chose to feed people instead – his “service” is measured in terms of the people he serves food to every day, literally. As the metaphors go, it’s a bit on the nose, but the food scenes make it work, to be honest.

Another show where these connections are central to the story is Let’s eat (2013), where four single people are bonded by their love of eating well and dining out. There’s a scene in episode five where actress Lee Soo-kyug (whose characters also have the same name) teaches a restaurant owner the difference between ramen and udon noodles. The three friends then proceed to gobble down portions of Budae Jijigae (a kind of spicy sausage stew that includes ham, sausage, kimchi and noodles) – with extra ham on the side (very important, this, as we we learn during the scene).

The late Anthony Bourdain, speaking of the inextricable links between food, cultural pride and memory, once wrote: “People are generally proud of their food. A willingness to eat and drink with people without fear or prejudice…they open up to you in a way that someone visiting and driven by a story might not understand. For a moment, or a second, the pinched expressions of the cynical, world-weary, throat-cutting, miserable bastards we all must have become disappear, when confronted with something as simple as a plate of food.

Something similar is brewing in these Korean TV shows. The food sequences are shot and presented in front of the audience almost like a metonymic approach to storytelling – with a few quick taps (or twists of the wands) we learn a lot of important things about the character cooking or eating. We know how they grew up, what they love and hate today, what are the things that are most important to them. It’s food as an emotional shortcut, basically. It’s an effective storytelling technique, suited to the needs of K-dramas in particular.

In a scene from K Food Show: A nation of broth, when the three hosts are in Seogwipo (part of Jeju Island), they enjoy a delicious bowl of cutlass soup. Ryu Soo-Young says, at one point, “The fish travels to Seogwipo because it’s colder here, and that’s why the fish is so delicious.” The older, sardonic Huh Young-Man replies without wasting time, “I bet someone from Seogwipo told you that!” This little moment tells you a lot about hyper-local food cultures and the stories that emerge organically from them. Everyone is proud of their own foods, the things they ate growing up. It is natural that in their eyes, even fish conform to the needs of culture.

A nation of brothlike so many other Korean shows (both scripted and otherwise), includes truths like this, which is why foodies love watching K-dramas.

Aditya Mani Jha is a Delhi-based freelance writer and journalist currently working on a book of essays on Indian comics and graphic novels.