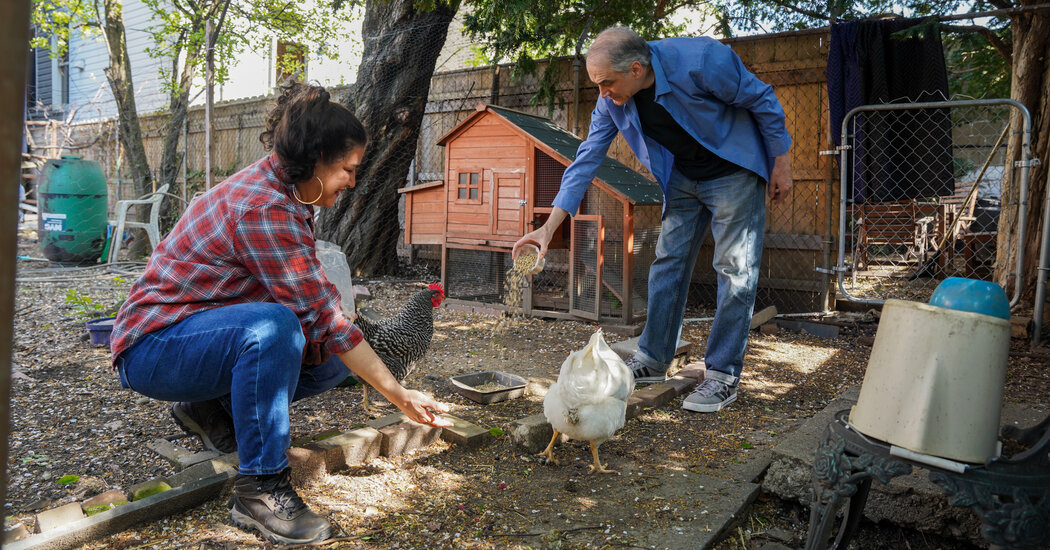 As the Queens Botanical Garden’s first new executive director in nearly three decades, Evie Hantzopoulos is leading the Flushing-based nonprofit through a period of expansion that includes building a $32 million education center of dollars.

After serving as executive director of youth organization Global Kids, where she worked for 11 years, Ms Hantzopoulos left to run for city council, losing the candidacy of Tiffany Cabán last year. She started the position at the community garden at the end of January.

“I’m glad I landed here,” she said, “because it allows me to give to Queens as well as the whole city.”

Ms Hantzopoulos, 56, whose parents were Greek immigrants, moved to Astoria, Queens, in 1999. She lives with her husband, David Motamed, 57, an associate doctor, their three children, who are 16, 19 and 22 years old and did not ask to be identified, their dog, Scout, a perched cat who answers (sometimes) to Mimi, a turtle named Spike and two hens, Ethel and Maude.

FEATHERED FRIENDS I’m literally up with the chickens at 6 or 6:30. Everyone in the house is still in bed, and I let Ethel and Maude out of their coop and feed them. We have had them since 2018, when they were one day old. It wasn’t my idea to have them, but I had to go to Massachusetts to take care of my mother for several weeks, and when I got home we had chicks.

SALTY STARTER One of the first things I do is make a cup of coffee and read the paper. I always get the print edition of The New York Times. I have a French press, but my coffee is nothing out of the ordinary. I like salty rather than sweet for breakfast, so I usually have hummus on pita or Greek bread with feta. From time to time, I have chicken eggs.

BATCH COOKING Before 8 a.m. I leave the house for groceries, usually at Stop & Shop by Home Depot or CTown, which is a block from my house. We cook a lot – we don’t do a lot of takeout – so I cook in batches to last the whole week. I make things like chickpea stew, or marinate chicken (I don’t let Ethel and Maude see me do it). I get a box of Community Supported Farming products every week, so I look through it to see what I can use.

SOMETHING SPECIAL I also cook Sunday dinner. I love having friends and family – usually my sister, Maria, and her family – at my house. The meal is usually something more special, say a roast, or in the spring and summer, fish or souvlaki grilled on the outdoor barbecue. After a light lunch, which is just leftovers, I clean the house – it’s a disaster area.

UP AND OUT Once I’ve done all the cooking and cleaning, I meet up with a neighborhood friend for coffee, usually at Sweet Scene or Madame Sousou. In hot weather, I watch what is happening on 31st Avenue. I was one of the organizers who launched its Open Streets program, which hosts everything from shows and children’s activities to holiday markets.

DIFFERENT ACTIVITIES Each member of my family is independent and we do a lot of our own things on Sundays. David was a professional bassist; he changed careers at age 40. He still plays in a band, The Royal Arctic Institute, for fun and rehearses on weekends. Sometimes David and I tend to our organic vegetable garden with one or more of our children. We don’t always have great success with the products, but I hope to get advice from the horticulturalists at the Botanical Garden.

FAMILY DINNER Around 5 or 6 p.m., I’m usually back home to prepare Sunday dinner. I love to cook for people, and enjoying a meal with my family and friends is part of my Greek culture. With my schedule, it’s hard to do this any other day of the week.

PREPARING FOR THE WEEK Once our guests leave, usually around 9am, I start to relax. I pay the bills and review the schedule for the coming week. Sometimes I check social media and finish reading the newspaper. My youngest is still in high school, so I make sure the homework is done. I can call a friend to catch up, but honestly, sometimes I don’t. At 10 a.m. or 10:30 a.m., I’m in bed. I fall asleep and sleep through the night.