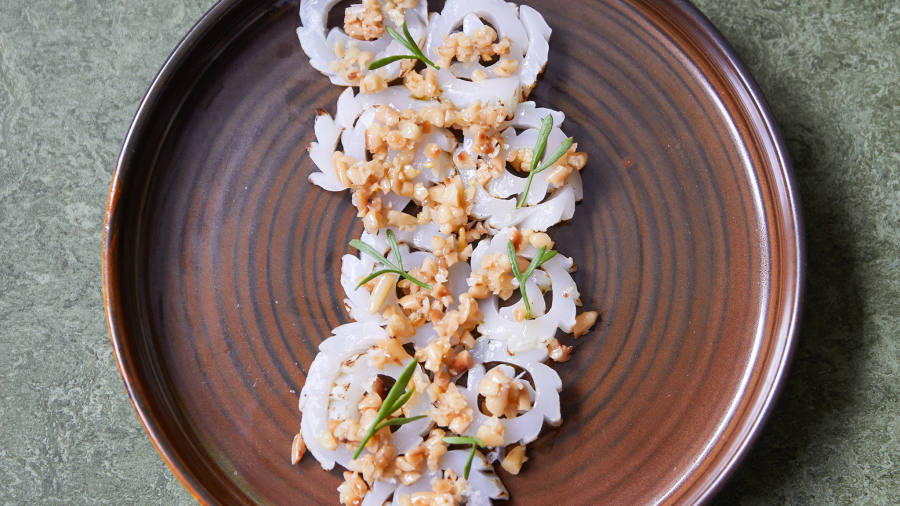 The Sea, The Sea, London: “anything but an average fish restaurant” – restaurant review

The first thing you need to know about The Sea, The Sea, is that there are dead fish hanging from the window. No bright-eyed fresh fish lying on a bed of ice, but real stiff ones, hooked on a hook and aging in a display case like prime pieces of meat.

I think they hang them there because they’re proud of them, although that might also be a partial warning to reckless bettors that this is anything but an average fish restaurant.

The Sea, The Sea is laid out like a Japanese sushi bar – a counter with seating and a few communal tables – but the food is actually not Japanese. It’s raw fish, but it’s not really sashimi.

In fact, it’s a hugely exciting take on the ideas of Executive Chef Leandro Carreira, whose previous restaurant Londrino seemed to have been loved by all London critics except me.

I found him competent but cold, up-and-coming but soulless, too Michelin starving to revel in – which is why I was delighted to see what he could do with such an informal and offbeat setup.

Monkfish liver parfait will never delight me. Some places call it ‘foie gras’, but if they are raising monkfish somewhere and force-feeding them like they do geese, I’d pay extra to see it.

In fact, it’s a smooth paste, extra high in fats and oils, and deeply satisfying. It is served as we hope, on brioche toast, which in this case looks suspiciously like a waffle. â€œYes,â€ said the chef behind the counter, â€œwe don’t have a toaster here, so we put the bread in the waffle press. “

Then come three perfect sardine flanks, which the chef slices, places on a metal grill and sears with a blowtorch. Lying on small beds of toast (waffly) and garnished with shreds of pickled pepper, they smell of the ocean and are some of the best I have eaten.

The dishes arrive too quickly, and we ask the staff to hold back a bit. There is incredible wine and sake to drink and their admirable enthusiasm does not leave enough room for appreciation.

There is a brief pause, then dressed crab on a waffle – a real waffle this time, sweet and sprinkled with seaweed. It’s a great combination albeit a little under-seasoned, and if I’m being honest the waffle theme is starting to confuse me.

The six-day-old kingfish is the big guy hanging out the window. In Japan they called it Hiramasa. He joins us sliced â€‹â€‹into large raw pieces, with a spoonful of fermented corn and a pinch of ground almonds and, dear Lord, he’s good.

Maybe we Brits aren’t ready for this, but Carreira understands that. Culturally, we consider â€œfishâ€ to be a bad thing and therefore we forget that aging makes fish no longer â€œfishâ€, but just infinitely more â€œfishâ€.

The chef begins to prepare a bowl of cockles, steamed in a broth of their juices and a vegetable-based XO sauce. He whips himself senselessly on a small pan on a ridiculous little induction ring when I suddenly realize what’s going on.

This excellent room, freshly furnished in a trendy new ‘shopping district’ of Cadogan Road, has no kitchen extractor. There is no stove, no deep fryer, none of the chef’s accessories – just the talents and creativity of a Michelin quality chef operating efficiently with the tools of a small snack bar.

They say that great art arises from the limits that we impose on the artist. All I can say is that restraint suits Carreira well and made him shine brightly.

The hulls are barely cooked, bursting with fresh sea fat and offset by the deep and tangy funk of XO. I take the bowl and suck up the last drop – chase it seconds later with a superbly sharp, cleansing plate of raw tuna and tiny tomatoes in red pepper miso.

The only note of silliness is a piece of halibut with hispi cabbage in a very nice fish sauce. All lovely, occupying a healthy size plate and seem to work very well in an average fish restaurant. . . which is really, really not.

We get the impression that there is a kind of inverted morality in there. The problem I had with Londrino was the sterility that kept a brilliant chef from doing brilliant things. I’m not familiar with the business circumstances that prompted Carreira to shut down Londrino and open in such a small and oddly equipped space but, as far as this fish lover goes, it might be the best thing he’s ever had. done.

The sea, the sea

To follow @FTMag on Twitter to discover our latest stories first. Listen to and subscribe to Culture Call, the FT’s transatlantic conversation, at ft.com/culture-call or at Apple podcasts