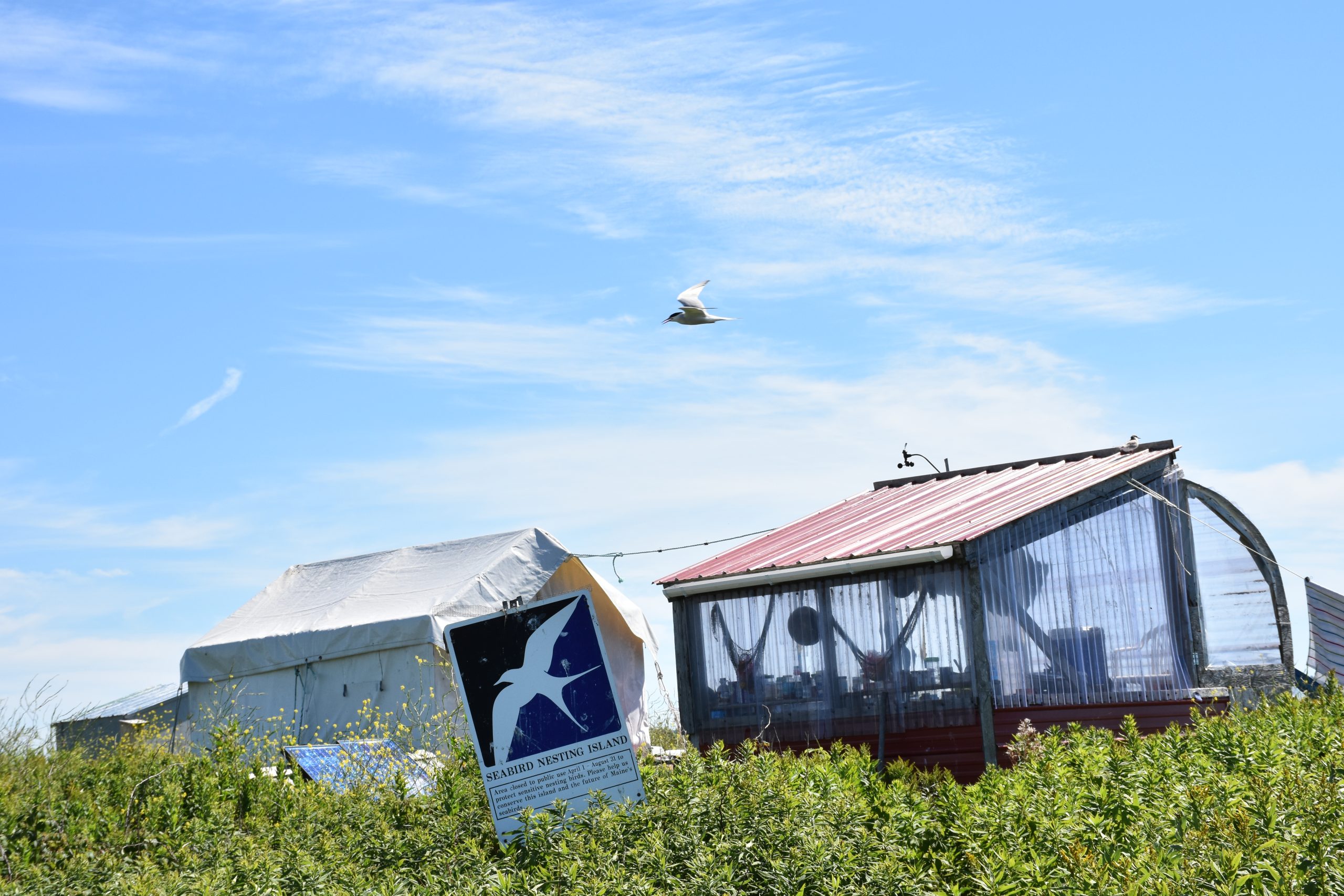 They arrive on the island with the birds in May and stay there until the birds leave in August. Their sleeping quarters for three months are compact tents, the kind preferred by backpackers, mounted on wooden platforms. There is no running water, so their toilets are an outbuilding with a compost toilet, and their bathing facilities are the sea and a hand shower.

They have a kitchen shed where they cook their meals on a propane stove. There is no fridge, only coolers. Their water supply consists of six 5-gallon jugs. Every three weeks they are replenished from the mainland by the Bremen-based Seabird Institute. This means that their ice melted and fresh food was consumed long before new supplies arrived.

“We do pretty well when it comes to cooking. I like to make lots of curries, fajitas and tacos,” Becker said. “We harvest the mussels when there is no red tide alert.”

The low island is devoid of trees, so there is nothing to prevent the winds. In August 2020, a tropical storm packing 50 mph gales passed.

“That was the scariest I’ve slept in,” Becker said.

But what would be an ordeal for most people, Becker and Mollo enjoy it.

Mollo was even more optimistic. “That’s really nice,” she said. “I like it.”

What does she prefer? “Maybe the view. There is always a different sky.

The work itself is difficult and sometimes frustrating. The list of predators they try to deter include herring and black-backed gulls, great horned owls, black-crowned night herons, peregrine falcons, ravens and ravens.

Perhaps the biggest predator threat to the chicks this year was a black-crowned night heron. Terns may defend themselves against other birds during the day by rising en masse and swarming invaders until they leave. Against night herons, terns are largely defenseless, as terns have poor night vision, while herons (as their name suggests) hunt at night.

How did they solve the problem? “The answer is, we haven’t,” Becker said.

Becker is authorized to kill predators that pose a threat and has a .22 caliber rifle for this purpose. Before resorting to the rifle, “we try to exhaust all non-lethal options,” he explained.

In this case, he concluded that the heron mainly fed on weaker chicks. “The little chicks wouldn’t survive,” he said, so he decided it was best to tolerate the heron.

Predator deterrence is important to the day-to-day survival of birds. In the long term, the fate of the birds may depend on research conducted by the Seabird Institute. Becker and Mollo’s typical workday is mostly spent collecting data supporting this research.

The two regularly check nests in five “productivity plots”. This year, the smallest of the plots had four nests, while the largest contained 30. The plots are surrounded by chain-link fences about a foot and a half high – too high for the flightless chicks to climb over. . The plots offer researchers a window into how other chicks on the island are doing.

Each plot is visited every two days. Early in the season, researchers count the number of nests, later the eggs and then the hatchlings. As the season progresses, they note the number of chicks that die – starvation is a big killer. They record the development of each remaining chick by weighing it carefully in a bag hanging from a hand scale. They also measure the length of each bird’s wings.

It sounds simple enough, but parents of chicks often show their displeasure with intrusions in unpleasant, even painful ways. They will fly low over searchers, defecating on them and pecking at their heads.

The hat that Becker wore during these nesting checks testifies to the aggressiveness of the parents. They pecked him so hard and so often that they shredded the fabric of the crown of his hat.

Some birds are more strategic in their attacks than others. One of them repeatedly attacked Mollo. “His hand had holes in it,” Becker recalled.

“I would hold a bag to weigh a chick,” Mollo recalled. “There was blood everywhere.”

This bird had learned to aim for flesh.

“I know this one. We are going back,” Becker said. “This individual was smart. It’s for the skin.