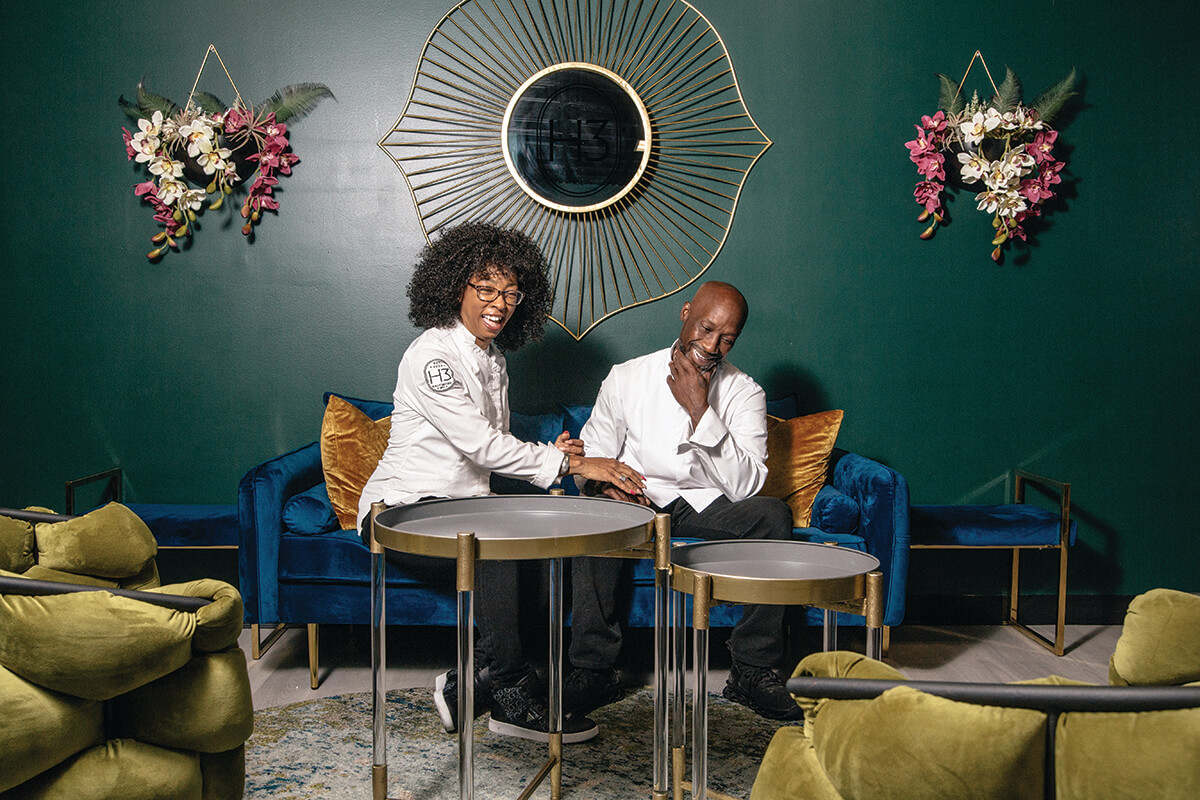 As they sat in a small Senegalese restaurant during a trip to Senegal and The Gambia in 2022, David and Tonya Thomas shared an “aha” moment.

“We sat on this dock at this roadside restaurant, and they had made us this meal of chicken yassa and jollof rice,” David recalls. “This chicken yassa changed my life.”

When the couple tasted the deeply flavorful dish – chicken seared in a caramelized onion and lemon mustard sauce – it sparked a flood of childhood memories. “Isn’t that your grandmother and mother’s smothered chicken?” Tonya said to David. “We always thought it was just a homemade dish,” says David. “It’s simple and complex at the same time, but when we tasted the chicken yassa, that taste was there, that flavor was there.”

For the Thomases, co-owners of The H3irloom Food Group, based in Bel Air-Edison, and longtime Baltimore restaurateurs — they owned Ida B’s Table and Herb & Soul Gastro Café & Lounge — the trip wasn’t just a trip of flavors across Africa but a homecoming.

For David and Tonya, whose ancestors were enslaved, their travels in Africa were the culmination of a lifelong pursuit to learn more about their roots through the foodways of their motherland. As they traveled the continent with other chefs and food historians, the journey was both professional and personal.

Shortly after returning from Africa, the duo, who left Ida B’s in February 2020, launched The H3irloom Food Group, which is dedicated to sharing the story of their ancestors through food, which they acts catering for weddings and parties in their 17,000 square – event space, hosting educational dinner series, making hot sauces from the huge commercial kitchen or teaching Baltimore’s young brown and black chefs techniques such as how to sous vide or how to braise properly.

“We’re not just a caterer,” David explains. “We are considering this endeavor to reclaim the narrative once again.”

Although he was unaware of it at the time, for David, 54, this narrative began in the Jonestown kitchen of his paternal grandmother: Anna Poole Thomas, born in Greensboro, North Carolina, who was the daughter of a slave. His Howard County home sat on five acres of land dotted with apple and pear trees and vines laden with grapes, watermelons and tomatoes. As a boy, David suffered from allergy problems so bad he couldn’t play outside, so he sat next to Anna while she cooked in her kitchen.

Despite his dietary constraints – in fact, because of them – he became a keen observer watching Anna cook. “She’s done everything from cookies to homemade root beer,” he says. “She ground her own salt and her own spices. I watched her slaughter chickens… I’m still looking for my grandmother’s recipes because I never sat down with her to write them down. I have a mental memory of flavors, and eating that chicken yassa took me back 40 years to sitting in his kitchen.

At an early age, Tonya, now 57, also grew up watching various family members work their magic in the kitchen, especially her maternal grandmother, Clarice Davis, who cooked for schools in Baltimore City, and her maternal great-grandmother, Levie Ratchford. “My great-grandmother cooked and cooked everything,” Tonya recalls of her large family, including her grandmother, who had eight children, and an aunt who had 12. “When we had family gatherings for on the holidays, there was always a spread on the table. We would not only have the turkey, but the ham. And you would not only have green beans, but green vegetables, mac and cheese and corn.

Tonya can trace her family’s roots back to the 1800s in Calvert County. His ancestors were oyster farmers. She started cooking for her grandmother. “When she was cooking, she would say, ‘Can you make me a cake?’ “, she recalls. “I started experimenting and making things. From there, digging into my family history, I discovered that my paternal grandmother, who died before I was born, was known for making bread pudding. I got tickled because I’m now known for my bread pudding.

“We’re not just a caterer,” David explains. “We are considering this endeavor to reclaim the narrative once again.”

Although they share an interest in cooking, David and Tonya have pursued other creative paths. She pursued her dream of working in fashion design. David, who trained as a classical pianist and played bass, became a freelance music producer. In 1990, Tonya was working as a visual merchandiser for the national clothing chain Fashion Bug in Arbutus, where David, who lived nearby, applied for a job. “I was a studio musician at night and would come down at 6 or 7 in the morning,” he says. “Sometimes during the day I was doing nothing, so I was like, ‘I’m going to get a job and make some money. I walked down the hill and saw this woman [Tonya] in the window, and I’m like, ‘Wow.’ And then I saw a ‘request help’ sign and I was like, ‘I’m going to go out there and find a job and hopefully find a wife too.’ True to his word, he got both. Fashion Bug hired him and two years later, on July 18, 1982, he and Tonya were married.

Even at Fashion Bug, Tonya was known for her culinary skills. When there was a grand opening or the start of a store remodel, Tonya would bake a cake or bake deviled eggs. His first professional job came when David worked for a production company that brought rapper Chuck Robb to town. Robb’s team was looking for someone to stock the green room before their gig, and David helped Tonya get the gig. Before long, the couple settled on the idea of ​​making food their livelihood. In 1994, they opened their own catering company, Skilletz, in which everything is cooked in a cast iron pan. The mission was for people to “know where their food came from,” says Tonya. “It was wholesome, organic, all natural, farm-to-table before it was a thing.”

Using organic and sustainable ingredients was a natural progression, says David. “It was us who went back to our childhood memories,” he explains. “My grandmother used to go out and pick her greens, and so did her family. We used the cast iron skillet as a base, even though we didn’t even know that was how our grandmothers cooked – it was just the universe talking to us.

From there, the duo briefly worked at the Metropolitan Kitchen & Lounge in Annapolis. David was the leader; Tonya made the pastries. Even though they were only there for a short time, the experience was formative. “They wanted a chef who could deliver farm-to-table cuisine,” says David. “I developed the menu, hired the staff, Tonya would help train the staff and the expo in the kitchen. It was important for the rest of my career in the restaurant business.

In 2012, the couple opened their first restaurant, Herb & Soul. It was take-out only, with a display case in the back of a budget bodega-style store in Parkville, even though the price was so high – tender ribs, lamb chops, bacon-wrapped pork loin , homemade rolls – people often called to make reservations. “We always told people to walk past the toilet paper to join us,” Tonya laughs at the memory. “They would see the menu and think it was an on-site restaurant.”

When the restaurant first opened, they called their fare “Southern Fusion”. “We were evolving,” says David. “Calling it Southern Fusion didn’t understand that all soul food – Southern food, all American food – is fusion, so much of the cuisines of the world are fusion.” But for David, fusion meant: “We wanted to cook Southern soul food, whatever we knew it was at the time, with an influence from all over the world.”

As restaurant enthusiasts poured in, the business evolved and grew. “We just put a little plastic folding table there,” Tonya explains. “Then these two women came in and ordered food with a bottle of wine and we were like, we can’t get them to eat from containers or paper plates,” so we went out and bought porcelain for people to sit and dine in the middle of the store.

When the convenience store closed, Tonya and David took over the entire space and their first restaurant was born.

From his earliest days, then-WYPR host Marc Steiner was a fan. One day, he brought in famed food historian Michael Twitty for lunch and introduced him to the couple. At the time, Twitty was researching and writing The kitchen gene, his memoir on Southern cuisine and culinary culture. (The book would later win the 2018 James Beard Foundation Book of the Year award.) Tonya recognized the famous author, but David didn’t. So when Twitty told them, “I like what you do, but you have a bigger story you could tell,” David brushed it off. “Okay, thanks for coming, I appreciate you,” he said in a somewhat dismissive tone. After they left, Tonya turned to her husband and said, “Do you know who was at the table?” “I was like, ‘Ohhhhhh’,” laughs David. “From there, we went down the rabbit hole.”

Meeting Twitty – someone they now count as a close friend and one of their Africa travel companions – was crucial for the couple. “From then on,” Tonya says, “we weren’t just feeding you anymore. There had to be a reason this food was on the table. As they uncovered the history of the eating habits of the African Diaspora, it deepened their cuisine and sharpened and shaped their mission to amplify their story – and the stories of those on whose shoulders they now stood. .