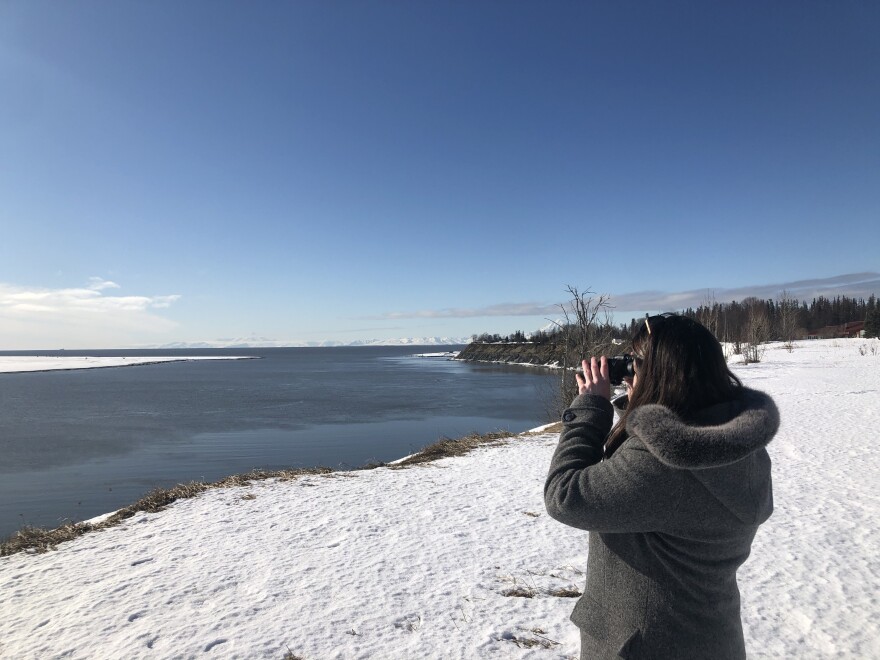 To the untrained eye, any flash of movement or ripple of water at the mouth of the Kenai River could be a beluga whale.

Not Kelly Hild from Kasilof. She is a trained beluga whale monitor, and she knows what to look for when monitoring beluga whales and reporting these sightings to researchers.

“We do a lot of scanning,” she said, pointing to the entrance. “From this place you can see the south. So if the whales came from the south, you could see them there.

Each spring, volunteers trained with the Alaska Beluga Monitoring Partnership roost on the Kenai and Kasilof bluffs and along the Turnagain Arm. They’re trying to spot critically endangered whales and record sightings for NOAA Fisheries researchers, so they can learn more about what the population is doing and why it’s not bouncing back.

Tuesday was the first official day of beluga monitoring on the Kenai. And Tuesday afternoon visibility was excellent, minus a streak of sun glare on the river.

Hild, looking through a pair of binoculars, did not spot any beluga whales or park seals near the Kenai Senior Center.

But she has seen them many times before. This is his third season tracking belugas.

“It’s kind of addicting once you get out here and start seeing the patterns and the times they show up,” Hild said. “And you think you have it, and I’m like, ‘OK, I know who’s going to show up today.’ And then they cheat on you, and they don’t show up, or they show up and it’s a whole different band, or it’s half the band. It’s very mysterious.

Researchers know that belugas are in the rivers in the spring and feed there on fish, including thugs.

But beyond that, there’s a lot they don’t know about why people move up the river, says Deborah Boege-Tobin, a biology professor at Kenai Peninsula College who is working on a research project. on belugas on the Kenai River.

“That’s part of the reason we’re watching,” Boege-Tobin said. “We think they go into the river to look for prey, but we don’t really know for sure.”

This year, volunteers are making observations even earlier than usual, said Teresa Becher, coordinator of the Alaska Beluga Monitoring Partnership. Although the official start of the daily two-hour monitoring sessions was Tuesday, there have already been several sightings this month, including a few times over Kenai.

“The Kenai River broke much earlier than last year than last year and the year before that,” Becher said. “And so the river is open now. The belugas have access to it, so they can come in and start looking at what’s in the river, what’s going down the river, and what food is available right now.

Becher tries to look for beluga whales almost every day on the Kenai River.

This week, she was back in town just in time to start the spring watch.

“I’m very very excited and evaluating to see how they fared over the winter,” Becher said. “They are a critically endangered group and so we want to make sure they survived and thrive this season.”

“So it’s not clear exactly why they hit that area first,” she said. “But at Turnagain Arm anyway, the hooligan run starts in April, and that’s when we really see them going into the upper entrance.”

But this year, monitors have already spotted whales on the arm, including a sighting on Saturday. On Tuesday, Steinert walked over to the arm to take a look.

Hild, the beluga watcher in Kenai, studied animal science in school. She finds it fascinating to watch animals in their natural habitat.

And she is far from the only one. The Beluga Monitoring Partnership had almost 30 volunteers last year, between March and May. While Hild was alone on the Kenai Cliff on Tuesday, she will be joined later this week by other volunteers.

“Everyone comes from really cool backgrounds, and it’s not a group of people I would have met otherwise,” Hild said. “And it’s just kind of a little beluga family coming together. And if you want to come and volunteer, contact us and meet us. The more eyes, the better it is here. It’s a really special experience that you really can’t get anywhere else.”

[Sign up for Alaska Public Media’s daily newsletter to get our top stories delivered to your inbox.]